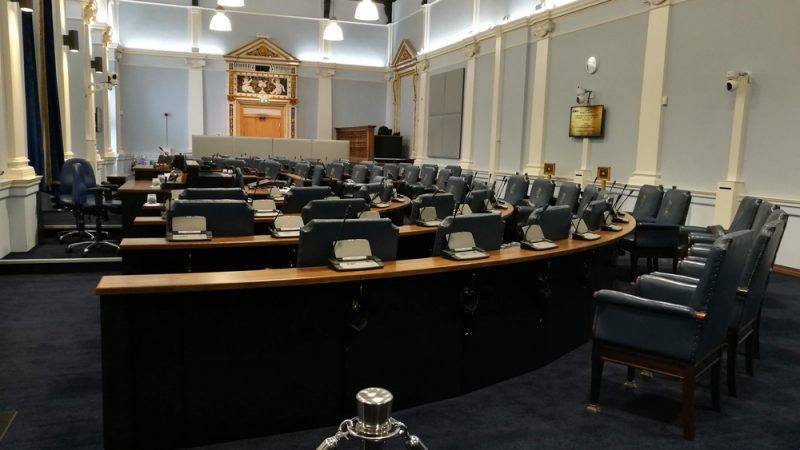 This means Sinn Féin’s leader in Northern Ireland, Michelle O’Neill, is set to take up the role of the first minister. Still, confirmation depends on the agreement of the second-largest party, the Democratic Unionist Party (DUP), to nominate a deputy first minister this week. [Shutterstock/RDK Creative]

Politicians in the Republic of Ireland have called for the swift formation of an executive in the Northern Irish assembly following the historic election result this weekend.

Nationalist party Sinn Féin, which supports a united Ireland, won a majority of seats in the Northern Irish Assembly known as the Stormont, it was confirmed on Saturday (7 May).

This means Sinn Féin’s leader in Northern Ireland, Michelle O’Neill, is set to take up the role of the first minister. Still, confirmation depends on the agreement of the second-largest party, the Democratic Unionist Party (DUP), to nominate a deputy first minister this week.

However, this is far from certain. The DUP, which dropped 6.7% in last week’s election, collapsed the executive to protest negotiations over the Northern Ireland Protocol earlier this year. The party’s leader, Sir Jeffrey Donaldson, previously refused to commit to forming an executive unless concerns about the protocol are scrapped.

“It is now incumbent on all political parties and elected representatives to deliver on their mandate, through the nomination of a first and deputy first minister and the formation of a new executive to serve the interests of all the people of Northern Ireland,” said Taoiseach Micheál Martin following Sinn Féin’s victory.

“Power-sharing and principles of partnership, equality and mutual respect are at the heart of the Good Friday Agreement, through which peace has been secured and progress achieved for almost 25 years,” he said. “A new power-sharing executive is vital for progress and prosperity for all in Northern Ireland,” he added.

It would be “undemocratic” for the DUP to refuse to form an executive, Martin told the Irish Times before the election, adding that parties had an obligation to take their seats in parliament regardless of the outcome of elections.

His call was echoed by others in Dublin.

“Despite a divisive election, I hope parties can now come together & find a way to form a functioning Assembly and Executive to serve the people of Northern Ireland,” Foreign and Defence Minister Simon Coveney wrote on Twitter.

Mary Lou McDonald, an Irish lawmaker and leader of Sinn Féin, has similarly urged the DUP to agree to form a new executive.

“I just can’t emphasise enough how essential it is for the DUP, for the leader Jeffrey Donaldson, to be crystal clear now that they will in fact share the office of first and deputy minister with Michelle O’Neill,” she told Newstalk radio on Sunday (8 May). “That’s essential because it goes to the core of the entire project, not just of peacebuilding, but of developing politics in the North of Ireland,” she added.

The UK’s Northern Ireland Secretary, Brandon Lewis, has also called for Donaldson to commit to restoring a power-sharing executive, saying he, the DUP, and all parties “should come together and [work to bring] Stormont back to deliver on domestic issues for Northern Ireland.”

The US State Department has released a statement urging Northern Irish leaders to re-establish an executive.