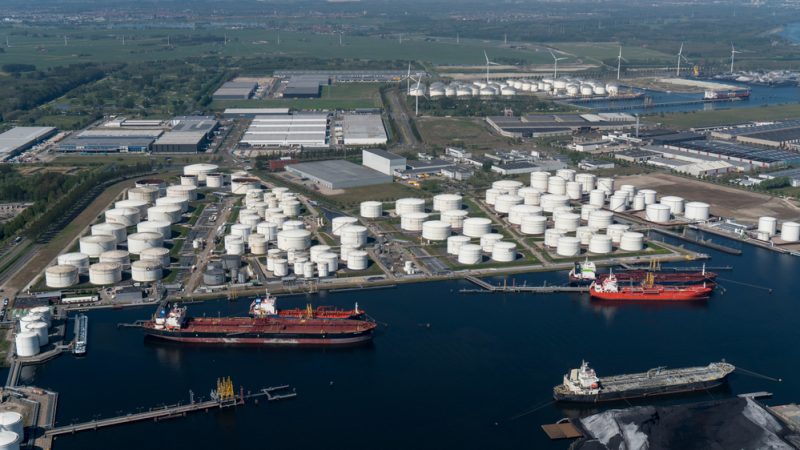 Russian ships are not allowed to dock anywhere in Europe because of the sanctions regime, but the Russian oil tanker, Sunny Liger, sails under the Marshall Islands’ flag and is thus exempt.  [Shutterstock/Aerovista Luchtfotografie]

Workers at the Amsterdam port are refusing to unload a Russian oil tanker that was previously refused docking at a Swedish port and is now anchored in the sea lock in IJmuiden, broadcaster NOS reports.

Russian ships are not allowed to dock anywhere in Europe because of the sanctions regime, but the Russian oil tanker, Sunny Liger, sails under the Marshall Islands’ flag and is thus exempt.

Amsterdam dock employees say they would refuse to unload the boat should it attempt to dock. When the boat arrived in Sweden, employees refused to unload it.

“We support the port employees,” said a spokesman for Mayor Femke Halsema, NOS reports. The municipality of Amsterdam is the port’s shareholder.

The FNV Havens trade union is also working towards ensuring that the municipality denies entry to the tanker. “This ship is not welcome, because we declare it to be infected,” Director Asmae Hajjari of the FNV Havens said to NOS Radio 1 Journaal.

“Colleagues in Sweden have refused it. We do not believe that if port workers elsewhere have not dealt with it, we should carry out the work. In the context of corporate social responsibility, we believe that the companies involved should lead by example and not unload the ship, the union’s director also said.

Oleg Nikolenko, the spokesman for the Ukrainian foreign ministry, also commented on the situation, tweeting: “We also call on dockworkers in Amsterdam: follow suit of your Swedish colleagues. Keep your feet off Sunny Liger. Deny service to it. Refuse to unload its cargo. Disassociate the Dutch people from Russian money soaked with the blood of Ukrainian children and women.”

While the Dutch government has said that it wants to take steps toward becoming less dependent on Russian gas, no official announcements have been made on the matter.