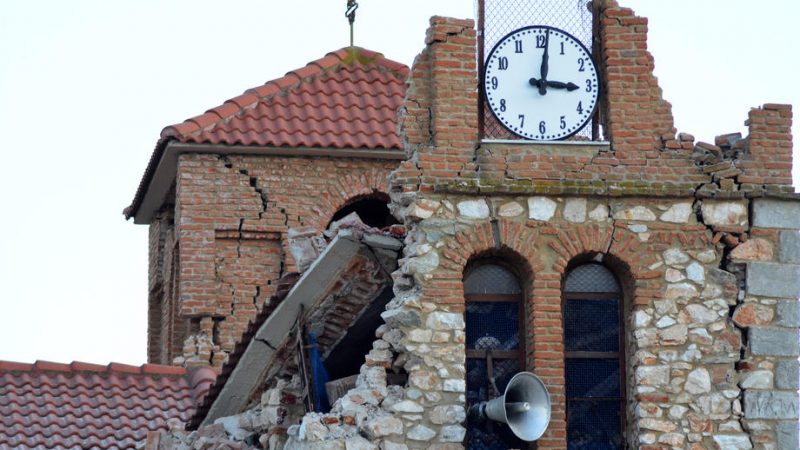 Damages of a church in Mesochori, a village near Larissa, after a strong earthquake that shook the wider region of Thessaly, central Greece, 03 March 2021. [EPA-EFE/APOSTOLIS DOMALIS]

A 5.9 Richter scale earthquake with an epicentre 21 kilometres southwest of the city of Elassona shook central Greece on Wednesday,  followed shortly after by a 4.4 Richter scale quake seven kilometres from Elassona.

At least 30 houses were damaged by the earthquake in the same village but no serious injuries have been reported, according to the civil protection directorate of the region of Thessaly, which urged citizens to remain in open space.

Costas Papazachos, a professor of seismology at the Aristotle University of Thessaloniki (AUTH) did not reject the possibility of an aftershock and said schools should remain closed on Thursday while his colleague, Professor Manolis Skordilis, stated that “there were several aftershocks of quite large magnitudes, which is logical.”

Prime Minister Kyriakos Mitsotakis has ordered the interior ministry to put on full alert all available responsible services in the broader area. The most recent earthquake in the region measuring 6.2 on the Richter scale took place in 1781. (Alexandros Fotiadis | EURACTIV.gr)