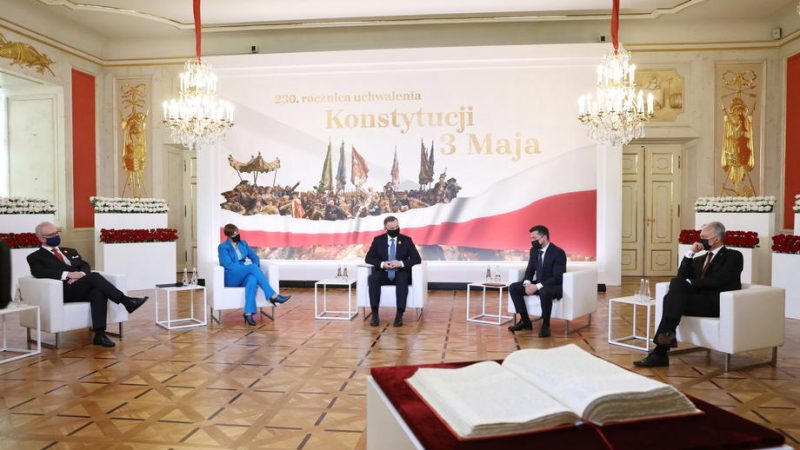 The presidents of Lithuania, Latvia, Estonia, Ukraine and Poland met in Warsaw on Monday to mark the 230th anniversary of the constitution adopted by the Polish-Lithuanian Commonwealth.

“The adoption in 1791 of this important act regulating the legal system of the Polish-Lithuanian Commonwealth was of historical importance, as it was the first modern basic law adopted on our continent and the second in the world,” they said.

“Europe should be built on the foundation of the fundamental values and principles of freedom, sovereignty, territorial integrity, democracy, the rule of law, equality and solidarity,” the statement continued.

“The May 3rd Constitution belongs to Lithuanians, Poles and other peoples of the region equally, as long as they are ready to take responsibility for the future of this rich tradition” emphasised the president of Lithuania.

After the official celebrations, the presidents met at the Royal Castle to discuss the future of Europe. Later, Polish President Andrzej Duda held separate bilateral talks with the presidents of Ukraine and Latvia.

The official celebrations of the National Constitution Day began Monday morning with the national anthems of Poland and Lithuania playing in the Sejm.