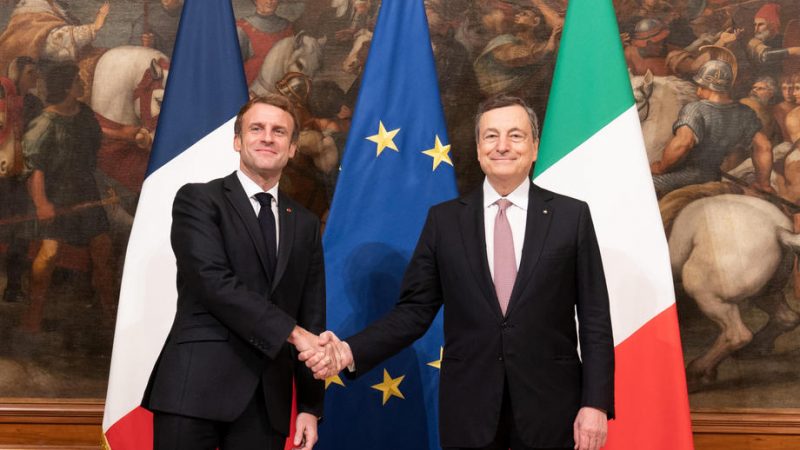 Some European leaders had long been preparing for the challenge of Angela Merkel’s departure. One of the outcomes is the Quirinal Treaty, the “French-Italian Enhanced Cooperation Treaty”, that French President Emmanuel Macron and Italian Prime Minister Mario Draghi will sign on Friday.

According to the Elysée, the treaty “will promote the convergence of French and Italian positions, as well as the coordination of the two countries in matters of European and foreign policy, security and defence, migration policy, economy, education, research, culture and cross-border cooperation.”

The move will have “an important symbolic value” in a European context marked by instability after Brexit and the political transition in Germany, an Italian government source said.

The current political leadership in Rome and Paris is interested in a more integrated Europe, with Rome particularly keen to make a new tripolar power balance and expand the Paris-Berlin axis.

Public debt is a topic where Macron and Draghi are unanimous. France has a public debt-to-GDP ratio of 115.2% and Italy the second biggest in the EU, after Greece, at a whopping 154.2%. Getting it back to the Maastricht criteria of  60% is mission impossible.

The main goal of France and Italy is to grow out of public debt so they will push for fiscal rules that allow for growth-enhancing spending and investments and bigger public debt.

On the other side will be “frugal states” like Austria, which backs the reinstatement of the Stability and Growth Pact. But Macron and Draghi will have strong arguments: the  SGP was made in other times for different times.

In fact, interest rates were higher those days, so it made sense to limit the debt level back then because debts would lead to higher costs. Today, the costs are so low that debt levels are not necessarily that relevant anymore.

Besides, we are now experiencing new realities, with the pandemic, inflation, supply lines bottlenecks, and new rules on the labour market.

Rome and Paris will push for a banking union with the European reinsurance system for national deposit guarantee schemes and expanding the recovery fund to make it permanent.

The new German government will play a key role, and Olaf Scholz will have to show whether he can fill Merkel’s shoes. Macron and Draghi hope he will bring his own shoes, but FDP and the Bundesrat also have a lot to say about it.

Oxford Economics concluded in its research note: ​​The next [German] government did not commit on the future of the EU’s fiscal rules, with no clear red lines allowing it to remain the arbiter between doves and hawks. A simplified rulebook focused on limiting the immediate post-crisis fiscal retrenchment in highly indebted countries may be the easiest compromise.”