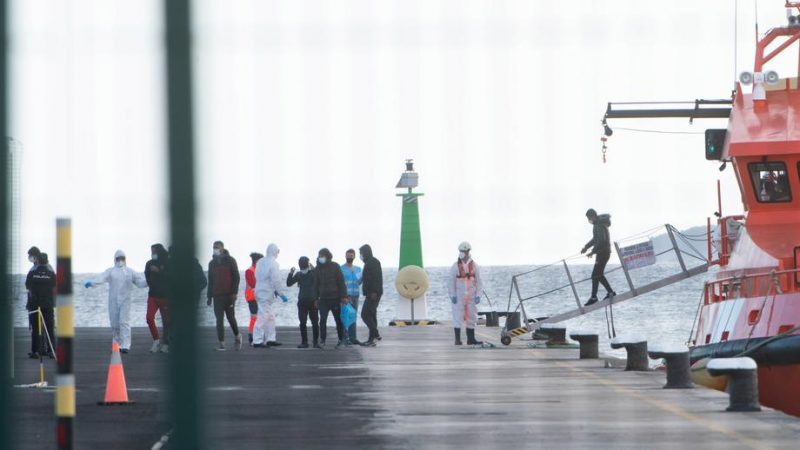 Two million Ukrainian fled their country over the last two weeks. “It will be a challenge for Sweden too,” said Migration Agency Director General Mikael Ribbenvik in SVT’s programme Aktuellt on Tuesday. [EPA-EFE/Carlos de Saa]

Eighteen migrants went missing Tuesday as more than 400 were rescued trying to reach the Canary Islands through the so-called Atlantic route to Europe, Canariasahora and EURACTIV’s partner EFE reported.

Around 5 pm, NGO Walkingborders received a call from a rubber boat with twenty-seven migrants. The boat had left the coast of Morocco fourteen hours before.

NGO Walkingborders provided all information, including the boat’s location, to the Spanish authorities. They also provided an update at 7:30 pm, when some migrants had already fallen into the sea and were at risk of drowning.

However, the rescue operative launched by the coast guard did not arrive until 11 pm, over six hours after the first rescue call, and only nine migrants were found alive.

Following the rescue mission, no details about the victims had been provided, nor has there been any search for bodies or possible survivors.

Many questions have been raised after the coast guard’s disastrous response.

Walkingborders has submitted a request to the Spanish Ombudsman, urging him to look for answers regarding the tragedy.

In the last two days, more than 580 migrants have been rescued along the Atlantic route, labelled as the most dangerous to Europe. In 2021, more than 4,400 migrants died trying to reach the Canary Islands.