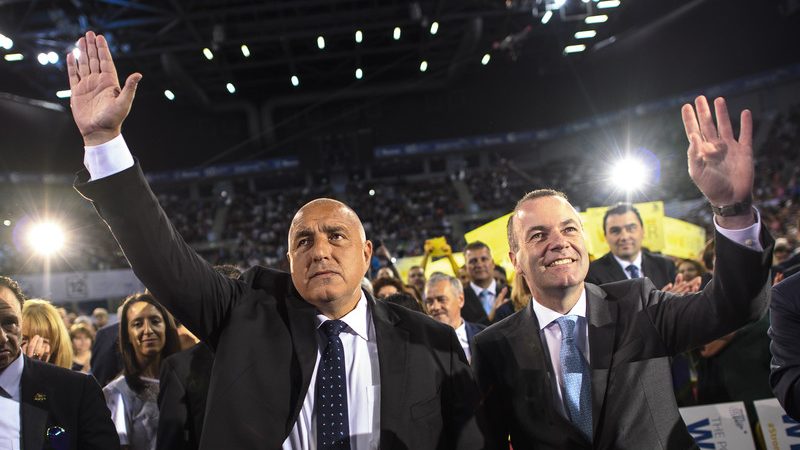 “I follow what is happening in Bulgaria and, Boyko, you have a lot of work to do. The EPP supports you, we stand firmly behind you. Rely on us!”, the EPP chief said, in a videoconference. [EPA-EFE/VASSIL DONEV]

The centre-right EPP group reaffirmed its support for former Bulgarian premier Boyko Borissov ahead of the 11 July elections, despite the multitude of corruption and brinkmanship scandals unveiled by the caretaker government.

Speaking in a videoconference, Manfred Weber, the EPP leader in the European Parliament, expressed his strong support for Borissov’s GERB party and said that they would keep a close eye on the snap parliamentary elections. At the 4 April general elections which failed to produce a government, GERB was ostracized by the remaining political forces.

In the meantime, the caretaker government, appointed by President Rumen Radev, has unveiled a number of allegations of high-level corruption. However, Weber did not mention them.

“I follow what is happening in Bulgaria and, Boyko, you have a lot of work to do. The EPP supports you, we stand firmly behind you. Rely on us!” the EPP chief told a videoconference.

“Within a month of the caretaker government of presidential candidate Radev, there has been a failure in vaccinations, the suspension of vital infrastructure projects for the economy and the blocking of the Recovery and Development Plan for Bulgaria,” Borissov said.

The former PM told Weber that his biggest fear was that “a large-scale falsification of the election results” was being prepared by “manipulating the software of the machines”.

One of the priorities of the caretaker government is to ensure fairer elections by introducing for the first time machine voting throughout the country. Bulgaria holds the world record of invalid votes with paper ballots.

After the elections, another EPP-affiliated force, Democratic Bulgaria, is likely to be part of a coalition government, while GERB is expected to remain in opposition. Democratic Bulgaria are strong critics of Borissov. Read more.