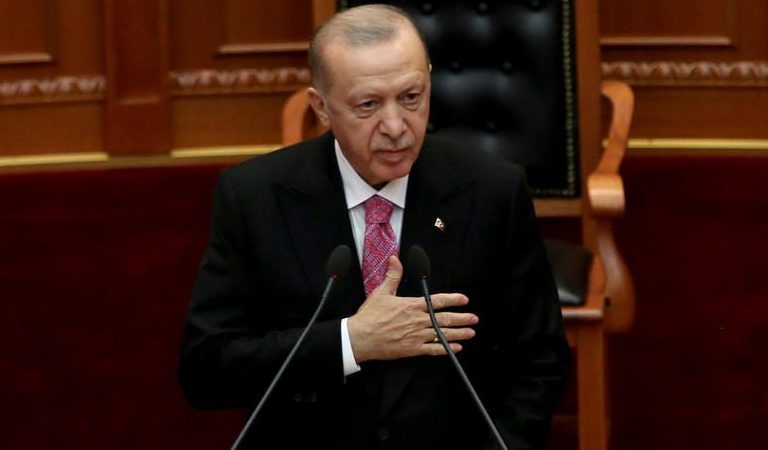 Turkish President Recep Tayyip Erdoğan’s address to the inaugural session of the Albanian Parliament on Monday included demands to take “immediate measures” against cleric Fethullah Gulen and his followers.

Erdogan holds “FETÖ” responsible for the government coup that sought to oust him in 2016 and has declared them a terrorist organisation. He said that “FETÖ”’s roots run deep, and he claims the organisation poses a threat to Albania’s security due to the presence of alleged members in education, religion and the private sector.

“We have paid a very heavy cost, we expect Albania to take immediate measures,” he said, adding he hopes the issue will be resolved by the next time he visits Albania.

Both in his speech to parliament, and during his earlier press conference with Prime Minister Edi Rama, Erdoğan highlighted Turkey’s various investments in Albania. These include a hospital in the central city of Fier, and the newly inaugurated apartments in Laç.

According to Erdoğan, Turkey has invested €3.5 billion in Albania through 600 companies that employ more than 15,000 people.

The focus of his remarks during today’s visit was also Turkey’s support for Albania in the aftermath of the 2019 earthquake and during the COVID-19 pandemic. In this regard, Erdoğan promised to supply Albania with Turkey’s newly-created vaccine Turkovac.

While Erdoğan maintained that this support comes with no strings attached and is done in the name of solidarity and brotherhood between the Turkish and Albanian people, his speech to parliament told another story.

“A precondition to our support and brotherhood,” Erdoğan said, “is your commitment to the fight against FETÖ.”

In the past, Turkey has leveraged their ties to Albania and Kosovo to crack down on Fethullah Gulen’s alleged followers, leading to potentially illegal extraditions and raids on schools.

These cases, involving more than 100 people, were described by United Nations rapporteurs as “extraterritorial abductions”, “forcible returns”, and “enforced disappearances.”

During his visit, Erdoğan visited Lac where the main square was renamed after him.

In Lac, Turkey has funded the construction of 524 new apartments following the town’s devastation by the 26 November 2019 earthquake that left dozens of families homeless. Turkey invested €45 million in the project.

The decision has sparked some reactions given Albania’s complicated history with the Ottoman Empire and the fact that Erdogan’s visit coincides with the 554th anniversary of Skanderbeg’s death, Albania’s national hero. Skanderbeg is often portrayed as a defender of the Christian faith against the Ottoman Empire.

Journalists were prevented from covering much of Erdogan’s visit as roadblocks prevented them from approaching Lac. In the official press conference, only journalists accredited by the Office of the Prime Minister could attend and were not allowed to bring or use cameras. All footage of Erdogan’s visit was controlled by the government with little opportunity given to independent media.

During his visit, a total of seven agreements were signed with Rama including legal, strategic, and cultural cooperation between the two countries. Another pertains to the purchase of military drones from Turkey.