EU Commission chooses not to comment on Tirana protests 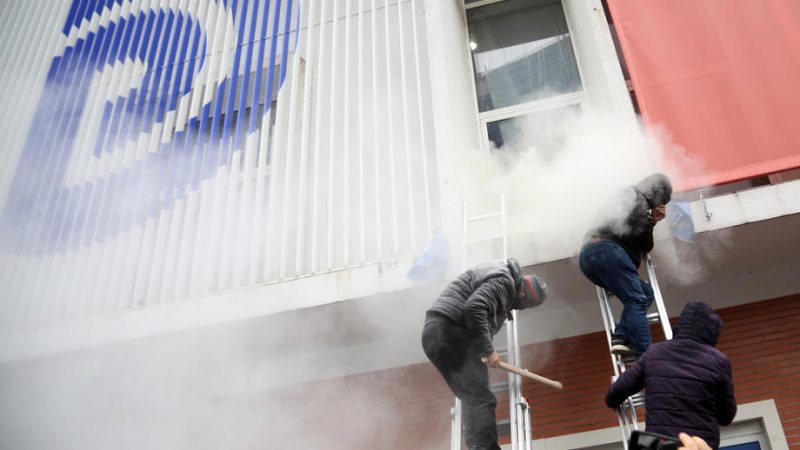 Protesters break into the headquarters of the Democratic Party in Tirana, Albania, 08 January 2022. [EPA-EFE/Malton Dibra]

The European Commission has chosen to not comment further on the demonstrations that rocked Tirana over the weekend as tensions between two factions of the Democratic Party came to a head.

On 8 January, ex-prime minister and president Sali Berisha led a crowd of supporters to the PD headquarters in Tirana. They then attacked the building, smashing windows, and broke down the door with a battering ram, crowbars, and a sledgehammer. Those inside the building retaliated by beating them back with various objects and spraying gas out of windows. Special forces and state police dispersed the crowd after one hour with gas and water cannons and made over 30 arrests.

The dispute came after PD Chairman Lulzim Basha unilaterally dismissed Berisha from the parliamentary group following the latter’s destination as persona non grata by the US for “significant corruption”. Pressure from the US and even the EU led to Basha taking the decision the night before parliament resumed in September, without putting it to a party vote.

Berisha responded by vowing to take back the party’s leadership and oust Basha. Both sides have voted to expel the other, and both claim they have the only legitimate rights.

The EU Delegation in Tirana tweeted on Saturday, condemning acts of violence and calling on those involved to be calm and show restraint. They added that the EU integration path requires a “solid opposition”.

Exit contacted the European Commission spokesperson and asked specific questions, noting they had already seen the EUD statement and requested elaboration.”You have seen the tweets by the EUD resuming our position. We will come back to you should we have anything further to say at this stage.”

A senior official from the EUD then responded to Exit by accident while meaning to respond to their Brussels colleagues.

They wrote, “Well put. I don’t think we need to engage further,” despite the questions not being answered or addressed to the EUD or anyone within it.

Exit had asked the EC’s position on a person designated non grata, sitting in parliament, whether they have concerns about what the dispute means for a balanced and democratic parliament, and whether they see it impacting democracy overall in Albania.

No other EU officials commented on the incident, which made headlines worldwide. Even Commissioner Oliver Varhelyi, whose portfolio includes political matters in Albania and the region, did not comment.