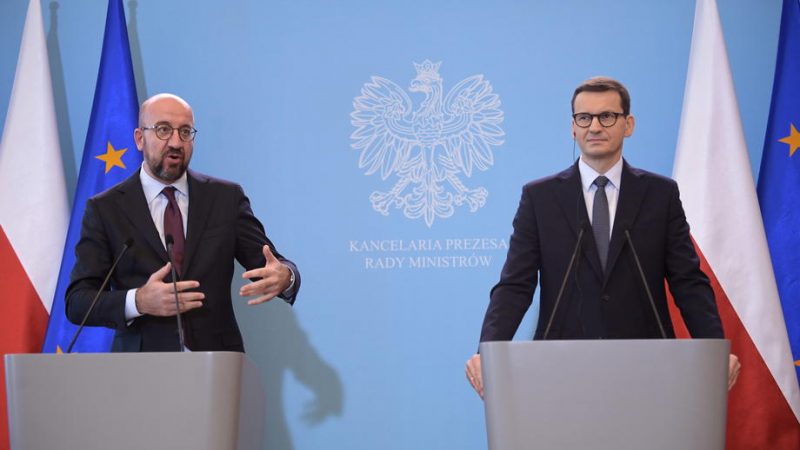 European Council President Charles Michel has arrived in Warsaw as the situation on the Belarusian-Polish border continues to escalate. [EPA-EFE / MARCIN OBARA]

European Council President Charles Michel has arrived in Warsaw as the situation on the Belarusian-Polish border continues to escalate. “I came to Poland because I wanted to express the solidarity of the European Union towards Poland. We take this crisis seriously. In the face of such an attack, it is necessary to act firmly, with unity, and on the basis of our fundamental values,” he said.

Michel called the actions of the Belarusian authorities in directing refugees towards the border, a “brutal, hybrid, violent and undignified attack.”

At the same time, he announced Brussels’ diplomatic offensive, which is aimed at countries participating – as he put it – directly and indirectly in the whole chain of bringing migrants to Belarus, that is, both countries of origin and transit countries.

“These are the hard tools at our disposal to act against a system that threatens the safety and health of families, children and women. Also, air carriers need to know what measures we can use to counter the danger facing people being transported to Belarus,” Michel said.

When asked by journalists about possible EU co-financing of constructing a permanent fence on the Polish-Belarusian border, Michel said: “it is possible on the basis of the current legal framework to finance the physical infrastructure” in this area.

However, he said that “this is a decision to be taken by the European Commission, although the position of the European Council is very clear here”. The Commission is reluctant to finance the construction of a permanent border wall with European funds. “We will see what the outcome of the discussion on this issue will be,” he added.

Polish Prime Minister Mateusz Morawiecki said he had asked for an urgent EU summit to be convened as soon as possible via video conference.

“We are increasingly determined to simply implement economic sanctions against Belarus. We will discuss them at the European Council. I have also asked for such a European Council to be convened even before the scheduled December meeting to discuss this problem,” the PM said.