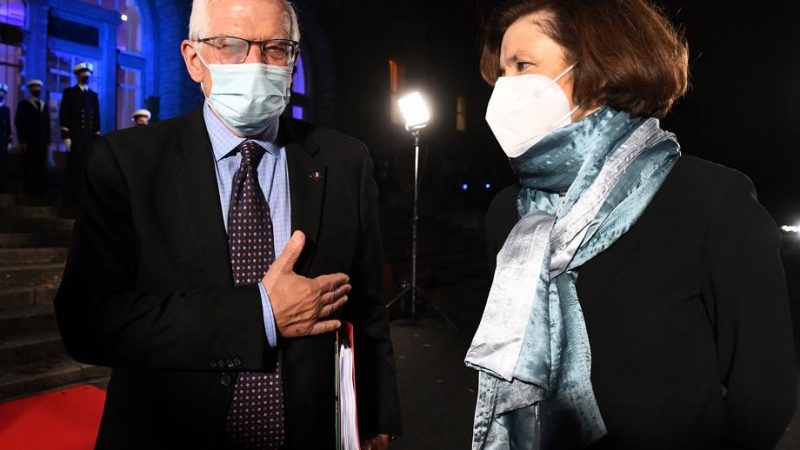 The High Representative of the European Union for Foreign Affairs and Security Policy Josep Borrell (L) and France's Defence Minister Florence Parly (R) talk to the press prior to a diner following an informal meeting with the European defence ministers in Brest, western France, 12 January 2022. [EPA-EFE/FRED TANNEAU]

Meeting in the western French seaside town of Brest, EU’s chief diplomat Josep Borrell underlined that the EU must define concrete steps in its response to Russia’s military build-up on Ukraine’s border.

Speaking to reporters on Wednesday evening, Borrell said Russian proposals on how to resolve the standoff “contravene the principles of the European security architecture” and said the matter would be at “the top of the agenda” at the informal ministerial meeting that runs until Friday.

“Working with the US and NATO, the EU must now define what we can do to uphold the security order of Europe and the principles underpinning it – which are clearly under threat today,” Borrell said in a blog post earlier that day, which outlined European proposals.

“Going into that meeting, two things are clear: we have to come to a united EU position, and we have to substantiate our role, backing it up with concrete action tracks, i.e. not just on what we think or want but on what we intend to do,” it said.

His comments came as NATO and Russian officials met in Brussels to discuss the situation in Ukraine.

Asked by EURACTIV, whether the ideas floated for an own EU security proposal approach towards Russia would be constructive, NATO’s Secretary-General Jens Stoltenberg said “Europe was already at the table” in Wednesday’s talks.

“21 of them are actually also EU members, meeting Russia and sitting around the NATO-Russia Council meeting table and discussing directly with Russia for four hours, all the aspects of great importance for European security,” he stressed.

“We have many formats when we discuss with Russia,” he added.

“We note that there is a shared ambition to make this document a truly ambitious document that allows us to make a clear and strategic assessment of the capabilities that we have begun to develop,” French diplomatic sources said.

“What we want is for the Europe of defence that we are building together to be a Europe that takes responsibility for itself, that has the capacity, the freedom to protect its citizens, the freedom to act, the freedom to preserve its interests wherever they are at play in the world,” French Armed Forces minister, Florence Parly, told reporters on Wednesday evening.

“What concerns us Europeans is precisely our capacity to act, to act in a concrete way,” she added.