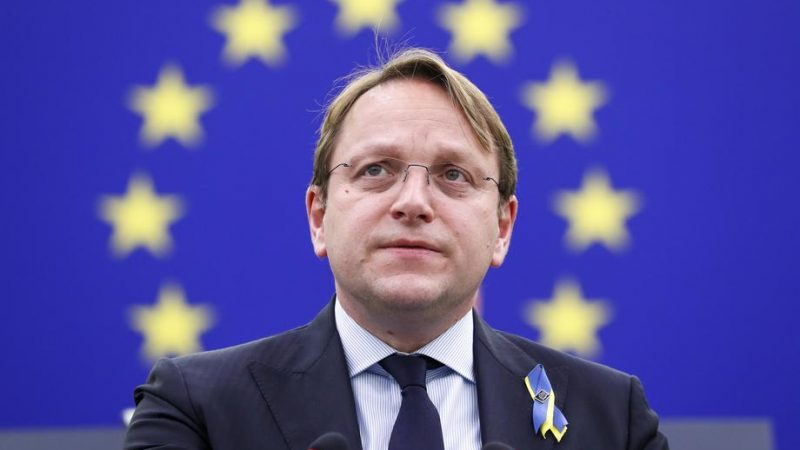 With day one taking place on Tuesday in Ohrid, North Macedonia, between the leader of the four countries, day two will see the arrival of Commissioner Varhelyi. [EPA-EFE/JULIEN WARNAND]

Bulgaria needs to lift its veto on North Macedonia’s EU integration by June, said EU Enlargement Commissioner Oliver Varhelyi, although signs from Sofia show this is unlikely to happen.

The inclusion of Bulgarians as an officially recognised minority in the Republic of North Macedonia constitution remains a condition for the start of the negotiation process for accession to the EU, Bulgarian Foreign Minister Teodora Genchovska told the international conference in Sofia – “EU meets the Balkans” on Tuesday. Commissioner Varhelyi also took part in the discussion.

“At this stage, they first must fulfil it (the condition for changes in the constitution) before starting negotiations with them,” Genchovska said.

This means that the Bulgarian veto will almost certainly not be resolved during the French EU Council presidency, despite European and US pressure on Sofia.

Varhelyi promised to come to Sofia as often as necessary so that a decision is reached by the end of June.

“We do not have time. The war has shown us how important European integration is,” Varhelyi said in Sofia. “I am extremely disappointed that we are still talking about the start of negotiations with North Macedonia and Albania. I thought we solved this issue two years ago, but now it is back on the table,” he added.

Problems between Sofia and Skopje are also blocking Albania’s European integration, which is on the same track as North Macedonia. More generally, the Bulgarian veto is making it difficult in Brussels to make more serious commitments on the integration of Ukraine and Moldova.

“We are in constant contact with our closest neighbours from Skopje, guided by the joint effort to overcome the artificial divisions created by the Yugoslav regime. We are investing resources and political capital in an attempt to find mutually acceptable solutions that will allow Skopje’s integration process to develop on a solid foundation,” Genchovska commented during the forum.

She added that building predictable and loyal relations is a complex process that requires political will and depends on concrete results, not deadlines.

Genchovska, who represents the populist party in government, “There is such a people”, has a very different view of North Macedonia than Prime Minister Kiril Petkov.  The foreign minister’s party does not support the policy of concessions to Skopje.

North Macedonia Foreign Minister Bujar Osmani said her country’s trust in the EU is declining. He also acknowledged that there is still no acceptable solution for Sofia and Skopje, and historical issues should be left to the joint historical commission.

“I think we have an ideal chance to reach a solution now, which will guarantee to speed up the process. It is not the time to wait for months and years.  Decisions must be made now, as we are responsible for the region and the future,” he also said.