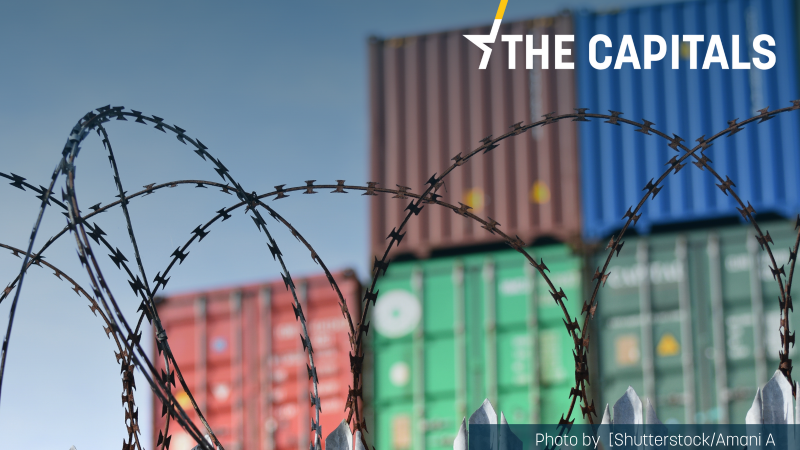 An increasing number of EU leaders have asked Brussels to push forward a fifth package of sanctions against Moscow following the atrocities and “unbearable scenes”, as French President Emmanuel Macron described, of the destroyed Ukrainian town of Bucha.

Several sources from the capitals confirmed to EURACTIV that a trade ban – as Warsaw recently requested – is now on the radar while EU leaders are still divided over gas imports.

At the 24-25 March summit, EU leaders added for the first time in the conclusions a reference to “war crimes” committed by Moscow in Ukraine, preparing the ground for a legal case against Russian leaders. In Warsaw, politicians are also looking at a Nuremberg-style tribunal for Russian politicians involved in the Ukraine invasion.

At that summit, though, EU leaders did not decide on a fifth package of sanctions saying such a package would be activated if Russia crossed the red line of atrocities. “This red line has now been crossed, and therefore the mission ‘Isolate Russia from the world’ mission is launched”, an EU source close to the matter told EURACTIV.

The sanctions issued so far are “clearly not [working]”, Irish Foreign Affairs Minister Simon Coveney said on Monday. “If sanctions don’t bite, if they aren’t forcing a rethink, then they aren’t working”, he told broadcaster RTÉ.

“Ireland will be pushing hard for a significant ratcheting up of sanctions beyond where we have gone to date,” said Coveney, including energy, access to ports, and more Russian banks being removed from SWIFT.

Poland recently called for a total ban on trade with Russia, which was opposed by Prague who said it was not a realistic option. A diplomat representing an eastern EU member state told EURACTIV the proposal is now back on the table.

Taoiseach Micheál Martin echoed this on Monday (4 April), saying that “every conceivable pressure” needed to be put on Russia to bring an end to the war following the “appalling and barbaric crimes” committed by the country’s troops.

In Paris, Macron said the events in Bucha justify imposing “a new set of sanctions” in the next few days, particularly on Russian coal and oil.

“The embargo on oil and coal” is one of the possibilities, which “will be discussed in Brussels at the COREPER on Wednesday [6 April],” the Elysée added.

But the hot potato remains an embargo on gas imports from Russia.

While Austrian finance minister Magnus Brunner stressed that the war crimes in Ukraine would be “shocking” and that they must be met with severe consequences, he emphasised that sanctions on Russian energy imports would hurt Europe more than Russia.

“Austria is not in favour of more sanctions concerning gas” as Europe would be “very much dependent on Russian gas.”

“I think all sanctions which hit us more than the Russians wouldn’t be good for us. That’s why we are against the sanctions on oil and gas,” he added.

Austria imports 80% of its gas from Russia and heavily depends on its steady flow, especially for its industry and energy power plants. The Austrian economy is already suffering from the current sanction regime, as its projected economic growth for 2022 has already been scaled down from 5 % to 3.5 %.

Instead, Brunner is advocating expanding the sanctions on more Russian individuals, organisations and institutions.

On the other hand, several representatives of the Italian government have agreed with the proposal of stopping gas and oil imports from Moscow.

“We have never vetoed any EU sanction, and we will not stop them in the future. The atrocities of Bucha show us not only that the war in Ukraine is not over, but also that its intensity and atrocity continue to increase,” Foreign Minister Luigi Di Maio told ANSA on Monday following a meeting with his Slovenian and Croatian counterparts in Zagreb.

“At this time, it is really difficult to justify and tolerate the energy reliance on Russia,” Ecological Transition Minister Roberto Cingolani admitted on Sunday.

“Time is over,” Enrico Letta, Deputy Secretary of the Italian Democratic Party, said earlier on Saturday, asking: “How many Bucha before we move to a full oil and gas Russia embargo?”

However, an embargo on Russian gas would likely have drastic effects on Italy.

Since Russia’s invasion of Ukraine, Italy has accelerated the process of energy diversification to find alternatives to gas supplies from Russia, which meet 40% of Italy’s energy needs.

Meanwhile, on Friday (1 April) Lithuania became the first EU country to stop the import of Russian gas. It was followed by Estonia and Latvia.

Lithuanian President Gitanas Nausėda said, “years ago my country made decisions that today allow us with no pain to break energy ties with the aggressor.”