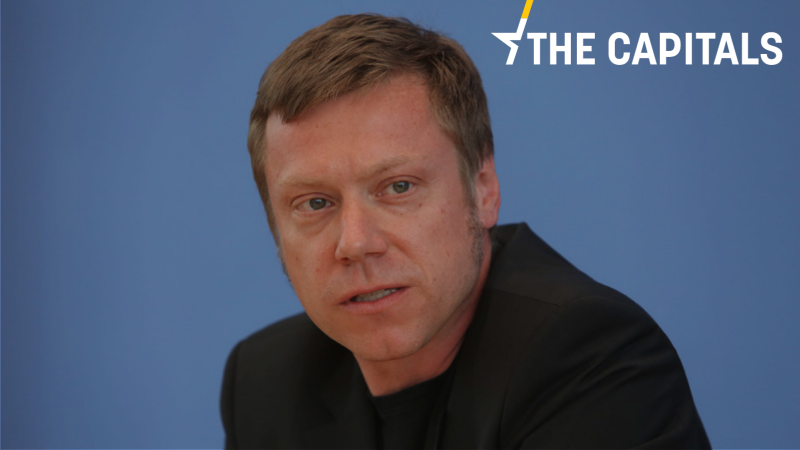 “Obviously there has been a major shift in the polls in the past few weeks,” MEP Martin Schirdewan (Die Linke), co-chair of The Left in the European Parliament told EURACTIV. [EPA-EFE/ADAM BERRY]

Leftist Die Linke is prepared for coalition talks about a progressive centre-left government in Germany after the elections, MEP Martin Schirdewan (Die Linke), co-chair of The Left in the European Parliament, told EURACTIV in an interview.

Asked about criticism over his party’s pro-Russian approach, he said that everything, including foreign policy matters, will be on the table in the post-election talks.

In Sunday’s TV election duel, CDU candidate Armin Laschet pressed SPD rival Olaf Scholz on whether he would form a coalition with the Greens and the far-left Die Linke.

Scholz again declined to rule out working with the Linke, arguing that voters must first have their say in the election. However, he made clear that there were clear differences between the parties, which would make a coalition very difficult.

“An acknowledgement of transatlantic relations, to NATO and the EU are necessary for a good government,” Scholz said.

At the same time, Greens candidate Annalena Baerbock stressed she is “fighting for a government under green leadership,” and her party would have the most overlaps with the SPD, “especially in the social area”.

In a reference to the Left, Baerbock said that “a pro-European policy” would be important and added there are other “big differences” between the Greens and Die Linke.

Most experts, however, believe a three-way coalition of SPD, Greens and Die Linke is the most likely outcome of the German election, a scenario that could take several months to negotiate, during which time Merkel would remain chancellor. But would this work?

An INSA opinion poll on Sunday showed that the SPD had extended their lead over the conservatives, with their highest rating since June 2017. The Social Democrats polled at 26%, CDU remained unchanged at 20% and the Greens were down one point at 15%.

“Obviously there has been a major shift in the polls in the past few weeks,” Die Linke’s Schirdewan told EURACTIV.

“I think we are in a very volatile situation now in Germany, where everything can happen, but that also means that there is a likelihood for an outcome that might enable a progressive centre-left government,” he said, adding that his party “will be prepared for this kind of situation”.

Asked why he thinks why mainstream political circles are worried about Die Linke joining a progressive German government, Schirdewan said “the main reason is that a progressive centre-left government would actually provide the chance to change the course of German politics and European politics in a sustainable way” as they would have the most programmatic overlap in their political programmes.

Speaking of Russia, Schirdewan said that “it is no secret that Die Linke was always in favour of a diplomatic approach when it comes to Russia, meaning that we should not operate in a confrontative way, that we should not impose sanctions, but seek to solve conflict via diplomacy”.

However, asked about whether the Greens’ hardline position on Russia would be a dealbreaker for a potential progressive alliance, he said: “If we enter into coalition talks, then everything will be on the table and the art of forming a coalition is to find compromises, every participant in this coalition talks should be able to give in here and there in order to find those compromises”.

“If we have to address the most pressing needs of the German society, which is the social inequality when it comes to wealth and income, which is addressing climate protection or climate change, when it comes to the digital transition, etc, then we see that the parties are very close – and this is what the German population is interested in,” he said.

“Nobody has ever asked me when I was campaigning about my position about Russia so far during this campaign, but a lot of people are asking what ideas I have for improving the German health system, raising the minimum wage, etc, etc. And these are the key topics that people are interested in,” he concluded.