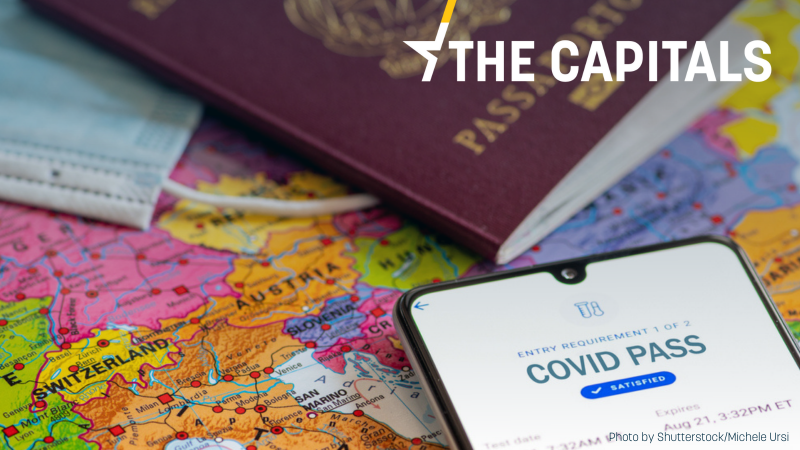 The EU minister said for now the only tool to increase vaccinations across Europe is the update of the COVID-19 digital certificate which will make travel inside the EU impossible for the unvaccinated citizens. [Shutterstock/Michele Ursi]

Updating the COVID-19 digital certificate with a booster dose will “inevitably force”  EU member states behind in vaccination rates to catch up, an EU minister told EURACTIV.com amid talks over bloc-wide mandatory vaccination.

Speaking to EURACTIV on the condition of anonymity, the minister commented on statements recently made by the EU Commission chief, Ursula von der Leyen, who said for the first time in public that it might be time to start thinking about mandatory vaccination in Europe.

The statement triggered a debate across Europe and caused a range of reactions.

In Prague, the Czech caretaker and future government clashed. In Bulgaria and Romania, whose performance in vaccination rates is the worst among EU member states (25.9% and 38.3% of fully vaccinated, respectively), politicians insisted that mandatory vaccination is not the way to go.

Italy went further, saying compulsory vaccination at least at this stage is the “wrong strategy”. “Putting in place a decision that doesn’t improve performance, produces fines that probably wouldn’t be paid, and incites the unvaccinated fringes to anger, serves no purpose,” Public Administration Minister Renato Brunetta has said.

“I can’t provide information about European matters. However, there are very different vaccination quotas across Europe and very different mentalities concerning vaccination. So, it would be not easy to reconcile with everybody on this issue.”

“This scenario doesn’t look very likely to me. It is a question that every country must solve nationally, up until now at least. I think that in Germany, there will be a national decision first,” Seibert added.

Germany’s ethical commission is currently debating the issue, and it will be put to the vote in the Bundestag in January.

The EU minister said, for now, the only tool to increase vaccinations across Europe is the update of the COVID-19 digital certificate, which will make travel inside the EU impossible for unvaccinated citizens.

The Commission has proposed that certificates will only be valid if a third dose is taken within nine months after the second.

EURACTIV has learned that Germany, Greece, Hungary, Italy, France, Lithuania, and Latvia are among the countries backing this proposal. These countries would prefer to decrease the time from the second jab, but they find the nine-month limit a good compromise.

Others, like Belgium and Denmark, preferred a 12-month limit, but this proposal has not gained ground.

A final decision is due at a Coreper meeting next week, and the new scheme is expected to enter into force as of February 2022.

However, it is not certain that the update of the COVID certificate itself will bring the desired results, especially for those unvaccinated who do not travel at all.

For instance, in Bulgaria, the domestic version of the COVID certificate is not helping increase vaccinations, as it allows non-vaccinated people who possess antibodies above 150 BAU/ml to visit malls or restaurants.

EU sources told EURACTIV last week that those resisting now will ultimately be forced to introduce mandatory vaccination at some point, otherwise the EU single market will be put to a critical test.