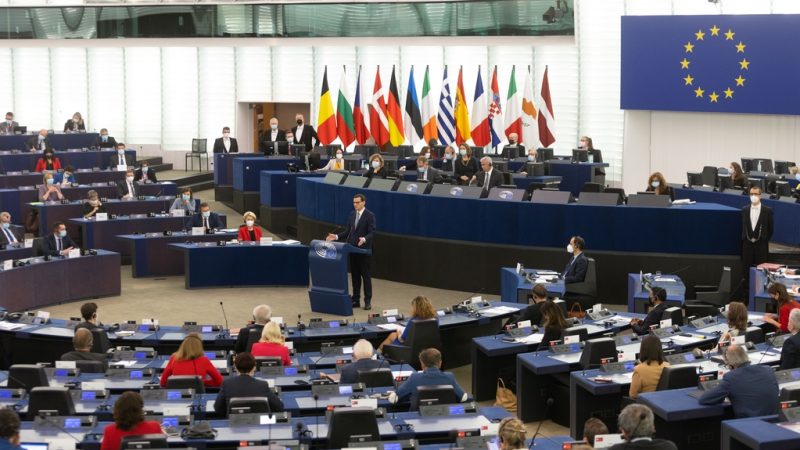 The European Parliament has adopted a tough resolution on the Polish rule of law following Poland’s PM speech in Strasbourg and amid the ongoing crisis.

The resolution considers the Polish Constitutional Tribunal as an “illegal” chamber, which adopted a verdict about the Supremacy of the Polish constitution over the EU treaties earlier this month.

According to a resolution, EU taxpayers money should not be given to a government breaking fundamental EU values.

The resolution – drafted by five groups: the EPP, S&D, the Greens, Renew, and the Left – was backed by 502 EU lawmakers while 153 voted against. Polish MEPs belonging to Poland’s ruling PiS party voted against while the opposition in favour.

EU lawmakers expressed their concerns about the precedent for national constitutional courts, should any of them follow into the footsteps of the Polish court, and called on member states to respect the role of the Court of Justice of the EU and its rulings.

The resolution came on the eve of the conclusion of the European Council meeting in Brussels, which deals with the same topic. The meeting, lasting just two hours, failed to yield any concrete results.

Referring to Polish PM Mateusz Morawieck’s speech in the EU house, S&D MEP Łukasz Kohut told EURACTIV: “This resolution comes as a result of a ‘festival of lies’ which lasted 33 minutes. People saw what we have been facing on a daily basis in Poland”.