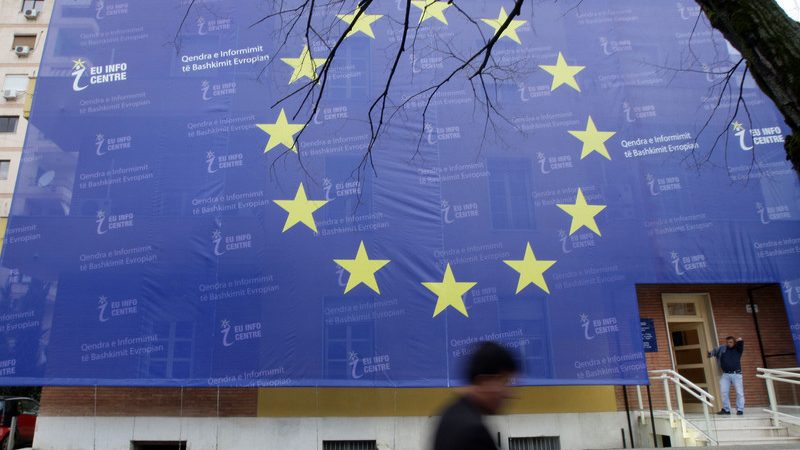 In the first seven months of 2022, 5,800 Albanians sought asylum in the European Union. [EPA/ARMANDO BABANI]

Between January and June 2022, 5,800 Albanians sought asylum in the European Union, double figures from 2021, while the UK, which saw some 6,000 Albanian asylum seekers this summer has been forced to u-turn on claims of fast-tracked returns.

In the first seven months of 2022, 5,800 Albanians sought asylum in the European Union making it one of the leading countries for asylum requests in the bloc, year after year, despite being a safe country of origin. Reducing this number is a core requirement of continuing along the path of EU membership, yet numbers continue to remain high.

The highest number of asylum seekers from Albania in EU countries was recorded in 2015 when a massive wave of emigration started in the country. In the period January-July 2015, nearly 34,000 requests were registered, while for the whole year, the number approached 70,000.

Then the pace gradually decreased, and while the pandemic year marked the lowest level of the last decade, numbers are starting to rise again.

In the UK, Albanians accounted for around 60% of all those crossing the Channel illegally in boats during the summer months, and up to 80% of all asylum applications. Some 53% of requests were approved in the first instance while many are still waiting for decisions.

These figures also do not account for the thousands that leave the country through regular routes such as employment, education, and family reunification. But figures on the current population in Albania are hard to come by as the census, initially scheduled for 2021,  has been postponed multiple times.

In terms of the situation in the UK, former home secretary Priti Patel previously claimed that Albanians arriving with spurious claims to asylum, despite over half being founded, would be fast-tracked back home.

After signing a returns deal with the Albanian government, Patel also said: “These Albanian nationals are brought here illegally by organised criminal networks travelling through multiple EU countries. They are asylum shopping, making attempts to claim asylum in the UK in the hope that they can remain here.”

But the government’s legal department was forced to concede that this was not possible and any fast-tracking procedures would not apply to Albanians seeking asylum in the UK.

The admission that the returns deal made with the Albanian government “does not apply to asylum seekers” was made in a letter to the NGO Care4Calais, signalling a massive climbdown for the British government.

Clare Moseley, the founder of Care4Calais, told The Guardian: “The suggestion was that asylum claims made by Albanians are spurious.”

In fact, recent figures show that 53% of Albanian asylum claims are accepted by the Home Office, demonstrating that for many Albanians, their country is not a safe place to live.

“Under the threat of judicial review, the government has performed a major climbdown. In doing so, they are accepting that people from Albania have the right to make an asylum claim and have it fairly heard. This is a victory for human decency,” she added.