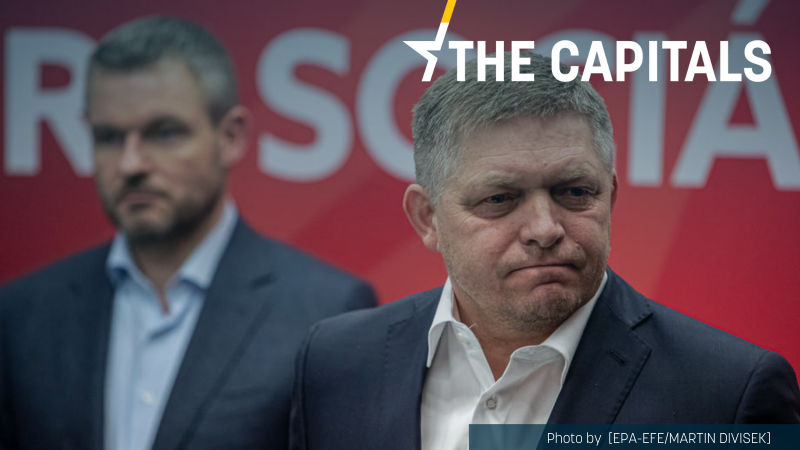 European socialists are facing repeated calls to take action against their Slovak member party Smer-SD. In an open letter, Slovak MEPs point out that its leader Robert Fico “assists the spread of Kremlin propaganda”. [EPA-EFE/MARTIN DIVISEK]

The Party of European Socialists has stood by Former Slovak prime minister and Smer party leader Robert Fico after he announced he would pursue a coalition with the far-right Republika movement and likened NATO soldiers to Nazi troops.

European socialists face repeated calls to take action against their Slovak member party Smer-SD. In an open letter, Slovak MEPs point out that its leader Robert Fico “assists the spread of Kremlin propaganda”.

Fico has recently likened the arrival of NATO soldiers in Slovakia to “welcoming of the Wehrmacht” and described the war as “a conflict between the United States and Russia”.

Fico has also publicly admitted to seeking a coalition with the extreme far-right.

“We have absolutely no problem with them,” said Fico of the movement Republika, led by a non-attached MEP Milan Uhrík, who refused to condemn the Holocaust on account of “not being a historian” and whose speech on the Ukrainian war was booed in the European Parliament.

Smer-SD was the first party to have their Party of European Socialists membership suspended for ten months in 2006 in response to their governing coalition with the Slovak National Party, with whom they also want to cooperate after the next election.

But the socialists are now backing their Slovak member, who they also threatened to suspend in 2015 for its leader’s anti-migration rhetoric.

“Smer-SD has consistently expressed its desire for a coalition composed of progressive parties,” said PES in a statement.

Currently in opposition but strengthening their position in polls, the party of Fico has been steadily shifting their position amid corruption scandals and high-ranking member defections. Where it once focused on social packages and raising pensions, it has moved to anti-vaccination and pro-Russian rhetoric.

But the European socialists are content with the party toeing the line on the European level. “The position of the PES on the Russian invasion of Ukraine – supported by all PES member parties – is clearly set out in the statement adopted by the PES Presidency,” claims the party. Here, the conflict is described as “Russia’s unprovoked military attack against Ukraine”.

The S&D group in European Parliament did not respond to the request for comment.

“They will always be fascist”

“Today we see that our warning about the cooperation of Smer-SD with fascists has proven to be true. The leader of Smer-SD openly and publicly speaks of future cooperation with the fascist movement Republika,“ reads the letter addressed to PES and S&D leadership.

Republika was created in 2019 by ex-members of the ĽSNS party, whose leader Marian Kotleba was recently sentenced to four years in prison for using Nazi symbolism.

Uhrík’s movement is positioning itself as a more grown-up political force, but its ideology remains firmly rooted in the extreme right. Just this week, its members visited the border with Ukraine and recorded African people attempting to flee the war-torn country and made racist commentary about “economic migration”.

Smer’s plans on a coalition with Republika were not universally welcomed even in their own party. European Parliament Quaestor and Smer member Monika Beňová wrote that Uhrík “is a fascist and most likely will always be fascist” and that cooperation should be a “no-go” for any social democrat.