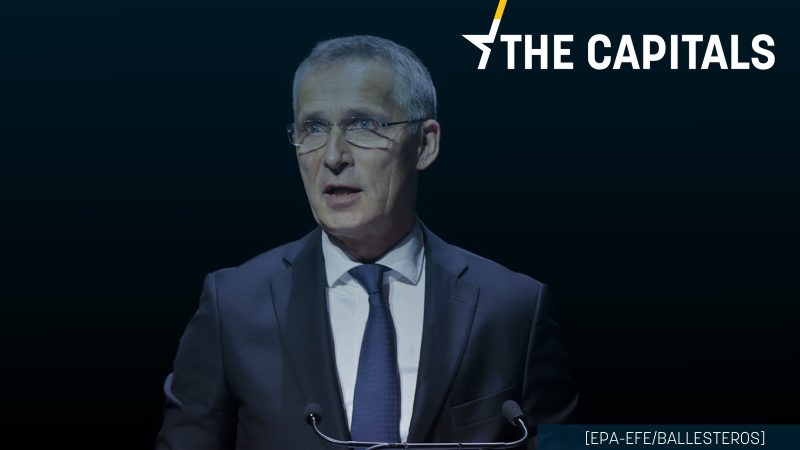 A few weeks earlier in Davos, Stoltenberg warned that Western countries should not trade security for economic profit, pointing to the risks of leaving close economic ties with Russia and China unchecked. [EPA-EFE/BALLESTEROS]

While Americans and Europeans are still split on whether to treat China as a security ‘threat’ or ‘challenge’, the gap is closing as allies try to agree on NATO’s new long-term strategic document, set for the first time to mention Beijing.

A few weeks earlier in Davos, Stoltenberg warned that Western countries should not trade security for economic profit, pointing to the risks of leaving close economic ties with Russia and China unchecked.

EURACTIV understands that the majority of members, including France and Germany, are apprehensive using the same threat description for China as for Russia and are more comfortable to designate Moscow clearly a security ‘threat’, while Beijing is dubbed a security ‘challenge’.

However, even designating China as a ‘challenge’ would present harsher language than in NATO’s current strategic concept, released in 2010, which does not mention the country.

Last year, NATO leaders, in a historic shift, stressed that China posed challenges that must be answered, partly at the urging of the US.

“Transatlantic views on China have long been diverging, but recently they are gradually converging,” Bruno Lete, transatlantic fellow for security and defence at The German Marshall Fund in Brussels, told EURACTIV.

“Nevertheless, EU member states maintain a practical approach toward China, mainly due to economic interdependencies, EU member states are not unanimous whether China constitutes a threat and for the time being the consensus describes China as a ‘strategic competitor’,” he said, adding that NATO’s new strategy is set to follow that line.

NATO will also likely seek to minimise cooperation with China in infrastructure construction and supply chains via the NATO framework.

Washington, especially under former US President Donald Trump, has long pressed European and other countries to exclude Chinese technology, such as Chinese telecoms equipment maker Huawei from 5G networks.

“The Trump administration was putting the EU in a position where they were asked to accept an ‘America First, and Against China’ policy, but this didn’t work out well for Washington,” Lete said.

“The Biden Administration is more nuanced, understanding that Europeans have their own relationship with Beijing, but nonetheless pressing EU capitals to address security concerns emerging from China – this puts Europeans in a much more comfortable position to publicly consider transatlantic alignment on China,” he added.

“A hardening position of NATO and the EU vis-à-vis China generally reflects a similar trend in Germany,” Tim Rühlig, a research fellow at the German Council on Foreign Relations (DGAP) told EURACTIV.

Currently, the German government is working on a new China strategy that will most likely spell out this more critical approach, addressing supply chain dependencies – not least in light of the recent experiences with critical dependencies from Russia in the energy sector, Rühlig said.

“What remains contested, however, is the degree, the speed and the method of disentanglement,” Rühlig said, adding that both in the economic and the political circles of Germany, there would be different positions.

According to the German expert, this would be especially visible in the country’s strong automotive sector, where China is a critical import and export market for Germany.

“Since China is a major player in e-mobility, China turns in the coming years from being primarily a market opportunity to predominantly being a competitor for the German car industry,” Rühlig said.

“Reducing critical dependencies from China is more difficult and will take a longer time than decoupling from Russia, but the consensus that we need to reduce dependencies and adopt a more critical approach is growing steadily.”

France, meanwhile, after French President Emmanuel Macron took office in 2017, there has been a call for more restrictions in. Chinese investments, more prudence, and creating an industrial strategy that, in time, does away with Chinese inputs.

Though there has never been any direct reference to China, it is at the heart of France’s industrial strategy. This was made starkly clear following the masks supply crisis during the COVID pandemic and that of semiconductors.

“The French government’s approach towards China is one of risk-reduction, especially when it comes to technology transfers and foreign direct investments,” Mathieu Duchâtel, Director of the Asia Programme at the Institut Montaigne, told EURACTIV France.

“The French approach is officially country-agnostic, though it is heavily informed by the realities of Chinese economic power,” Duchâtel added.

In this vein, France was a crucial actor in getting the EU regulation establishing a framework for screening foreign direct investments agreed upon in 2020.

The same goes with the 2019 PACTE law, which strengthens the government’s efforts to screen foreign direct investments and encourages French companies to check through their entire supply chains.