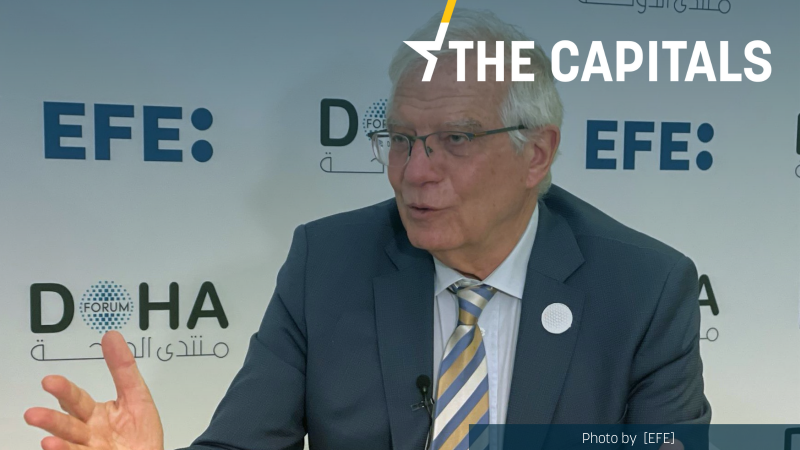 Borrell insisted on the need to maintain and intensify sanctions on Russia since Putin “is pulverising” Ukrainian cities. “Since he cannot conquer them, he is bombing them, causing a huge number of civilian casualties,” he said. [EFE]

The EU’s chief diplomat Josep Borrell has dismissed the prospect of Russian President Vladimir Putin cutting oil and gas supplies to Europe in retaliation to the tough economic sanctions imposed on Moscow following its invasion of Ukraine.

Russia “needs to sell its oil and gas”, Borrell told EURACTIV’s partner EFE in an interview at the Doha Forum, where on Sunday he met with leaders and political strategists in the Qatari capital debating the war in Ukraine, the refugee crisis and the climate crisis.

The Spanish diplomat stressed that Moscow makes “a considerable amount of financial resources it needs” from the sale of fossil fuels, “because the sanctions have blocked the assets that the Russian Central Bank has in American, European and Japanese banks”, although he acknowledged that Moscow still “has many (other assets) in China and in other countries where we cannot act”.

“But we have blocked a very important part of their foreign exchange reserves,” Borrell said.

However, he acknowledged that Putin’s behaviour has become unpredictable.

“I am not inside Putin’s head, and I don’t know what he will do. I never thought he was going to invade, and more than invade, to destroy Ukraine as he is doing,” he said.

On Europe, Borrell explained that while it wants to isolate Russia by cutting off oil and gas imports from the country, its economic sanctions have already caused a steep rise in energy prices that are hitting European consumers hard.

But he insisted on the need to maintain and intensify sanctions on Russia since Putin “is pulverising” Ukrainian cities. “Since he cannot conquer them, he is bombing them, causing a huge number of civilian casualties,” he said.

“We supply weaponry to Ukraine to defend itself, defensive weaponry, and we put sanctions on Russia to weaken it, especially the economy that revolves around Putin and the people who support him, the famous oligarchs and the leaders of this political system. And that’s what we are doing and that’s what we will continue to do,” he said.

But he also pointed out that it was easier for the United States to ban the import of Russian oil and gas because “they import very little, if not almost nothing,” while European countries “import a lot.”

Borrell said that the EU is working to find a diplomatic solution to the conflict, because “all wars end, and the sooner the better, with a ceasefire first and a peace agreement afterwards.”

“These things are done discreetly, but there are channels in place to achieve a ceasefire as soon as possible and end the suffering of the Ukrainian people”, the diplomat said, while predicting that the peace negotiations will certainly be long and difficult, but the important thing is to stop this war (…) that should never have started.