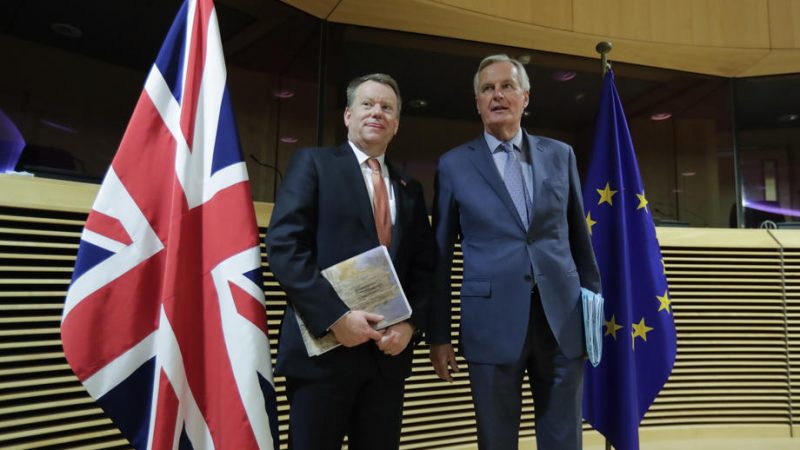 On Saturday, Johnson and von der Leyen agreed to push their negotiators to make a final effort to obtain an agreement. [EPA-EFE/OLIVIER HOSLET]

EU officials suggested on Sunday that a compromise on the access of EU fishermen to UK waters was close to being finalised but that gaps still remain on whether the UK should stay bound by the bloc’s social and environmental standards. Meanwhile, Irish PM Micheal Martin is pushing for a Brexit deal.

UK chief negotiator David Frost and EU counterpart Michel Barnier will hold further talks in Brussels on Monday ahead of a phone call between UK Prime Minister Boris Johnson and European Commission President Ursula von der Leyen which will assess what progress has been made on Monday evening, in what could well be a decisive moment in the negotiations. Barnier will brief EU ambassadors early on Monday morning.

On Saturday, Johnson and von der Leyen agreed to push their negotiators to make a final effort to obtain an agreement.

Meanwhile, Irish Prime Minister Martin said over the weekend that “every effort” should be made to secure a UK-EU trade deal. Following the news that negotiators from both sides would reconvene on Sunday, Martin welcomed the renewed commitment to reaching a deal and said that an agreement was “in everyone’s best interests.”

Yet, Paris reiterated the veto option in the case of a not-good deal. France’s Europe Minister Clément Beaune said over the weekend France was also mulling the use of its veto “if the agreement is not good and not in line with our interests, especially for fishermen”.