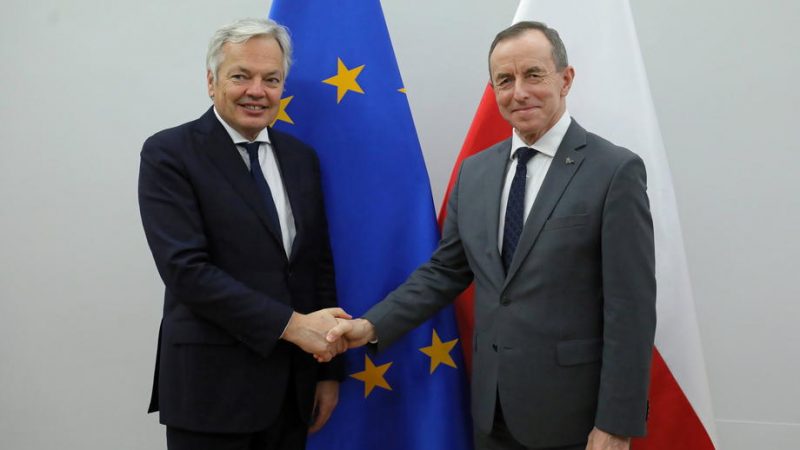 What Poland is doing “right now, in the moment of this migratory crisis, is right” and that it is acting “on behalf of the European Union”, according to German Interior Minister Horst Seehofer who visited Warsaw at the same time as EU Justice Commissioner Didier Reynders.

On Thursday (18 November), Reynders met with Polish Justice Minister Zbigniew Ziobro. Topics on the agenda were the Commission’s rule of law report, respect of the Court of Justice rulings, and the primacy of EU law.

“I gave the Commissioner a photograph of a Warsaw destroyed by Germans”, said Ziobro after meeting Reynders. The minister explained the symbolism: “Poles are and will always be very sensitive about equal treatment inside the European community”.

Ziobro was blunt during the press conference: “there is no rule of law without equal treatment. Some countries are allowed to introduce changes in judiciary, and other countries are deprived of such possibilities, just because this is what a commissioner, a CJEU judge or a Berlin politician, wants to do”.

“Threats to the rule of law undermine the EU core. Shortcomings in one country impact other member states and the entire EU,” said Reynders. He stressed the importance of a dialogue with Polish partners, saying, “I realise the difference of opinion”.

PiS lawmakers Marek Ast and Anna Czerwińska accused the Commission’s rule of law report conclusions of being “unfair and biased”.

The Commissioner argued, “The reforms of the justice system in Poland pose a serious threat. The reforms increased the influence of the executive and legislative powers over the judicial power to the detriment of the independence of judges,” said Reynders, before mentioning challenges to media freedom, the supremacy of EU law, and the so-called “fast track of lawmaking” in the Polish parliament.

“We stand by Poland”, said Seehofer after the meeting with Kamiński. The two ministers discussed the migration crisis on the EU and Poland’s eastern border with Belarus.

“We have the same reading of the situation on the border”, said Kamiński, adding that “Poland will not allow for creating an illegal migratory route from Eastern Europe”.

Seehofer said Poland is acting “on behalf of the European Union” and that what the country is doing “right now, in the moment of this migratory crisis, is right.”

Seehofer underlined that there is no German activity without keeping Poles in the loop: “We act together. We consult our actions and do nothing behind the backs of our partners”.