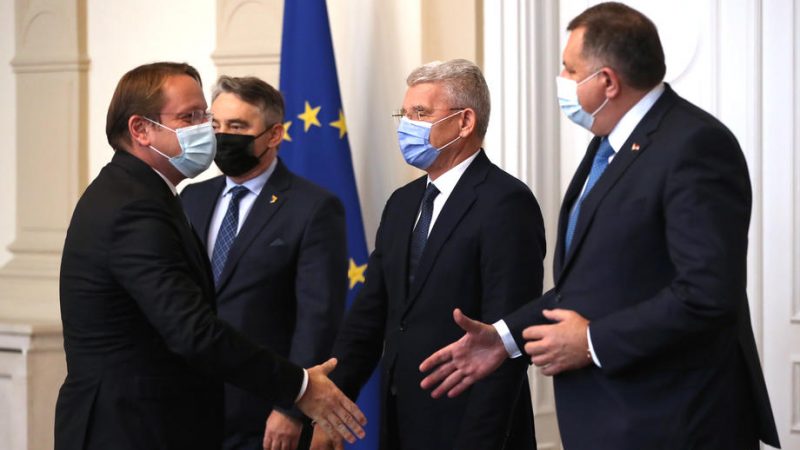 EU Enlargement and Neighbourhood Commissioner Olivér Várhelyi and SNSD leader Milorad Dodik “agreed” on the date of the special session of National Assembly of Republika Srpska, Serb entity (RS), as well as the dynamics of the “entry into force” of the conclusions related to the transfer of competencies in the field of security and defence, indirect taxes and justice.

The BiH media istraga.ba published the story referring to three diplomatic sources and publishing alleged internal EC document. The telegram was sent to Brussels on 25 November after the Commissioner’s visit.

“At the Special Session of the National Assembly of RS scheduled for 10 December, the Commissioner clarified that the session will indeed take place, but that a moratorium on the adoption of a law on unilateral withdrawal from state institutions for a period of 6 months will be announced. That has been agreed, and the representatives of RS will be responsible for all the opposite actions”, Johann Sattler, EU ambassador in Sarajevo, stated in his report.

In addition to the details of an agreement that defined a way out of the current crisis, the report labelled former international peace envoy, Austrian diplomat Valentin Inzko as the main culprit for the current situation.

“A fragile political package agreement seemed to have been reached, which would not only halt the implementation of policies for the unilateral withdrawal of the RS from State Institutions, but also de-block BiH state-decision-making bodies in order to continue work on EU reforms,” said the report, which was published by N1.

“As such, the Serb member of the BiH Presidency and SNSD leader (Milorad) Dodik had signalled willingness on two issues. Firstly, on the postponement of the vote on RS’ unilateral withdrawal from State Institutions by a period of 6-months. Secondly, on the return of RS representatives to BiH State decision-making bodies to work on the implementation of the Economic and Investment Plan, including the necessary reforms for that purpose,” emphasises the report.

The entity parliament’s special session took place on 10 December, when MPs, without opposition, voted on withdrawal from certain state institutions, including the Armed Forces, the High Judicial and Prosecutorial Council and the Indirect Taxation Authority, and defined further steps in the process.