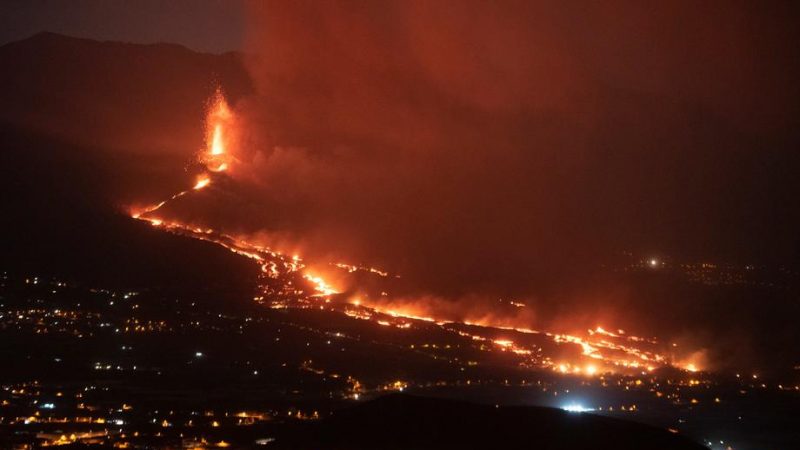 The red-hot magma has so far flattened over 860 hectares of land, the equivalent of 1,204 soccer fields, EURACTIV’s partner EFE reported. [EPA-EFE / Miguel Calero]

Around 50 homes have been evacuated Thursday as a dense river of lava approaches the municipalities of Llanos de Aridane and Tazacorte on the Spanish island of La Palma, where a volcanic eruption shows no signs of abating after more than a month of activity.

The red-hot magma has so far flattened over 860 hectares of land, the equivalent of 1,204 soccer fields, EURACTIV’s partner EFE reported.

The evacuees will join a further 7,000 people who have been forced to flee since the Cumbre Vieja volcano started its explosive eruption on 19 September.

The lava stream will reach the Atlantic Ocean soon, north of the new lava delta that started emerging three weeks ago when the first river of magma poured into the ocean.

The regional president of the Canary Islands, Ángel Víctor Torres, said on Wednesday that his government would do “whatever is humanly possible,” to alleviate the damage caused by the eruption.

“We can’t fight or keep the lava from getting where it’s heading,” he said.

“We do not have any mechanism for this to change. We are at the mercy of the volcano,” Torres added.

Air quality has improved in recent days and has been described as “moderately good” by experts monitoring the situation closely.

The National Geographic Institute recorded a slight spike in seismic activity overnight with the largest recorded 4.3 magnitude earthquake in the town of Villa de Mazo.

Experts from a national emergency committee (Pevolca) set up to monitor the evolving eruption warned further earthquakes could shake the area.