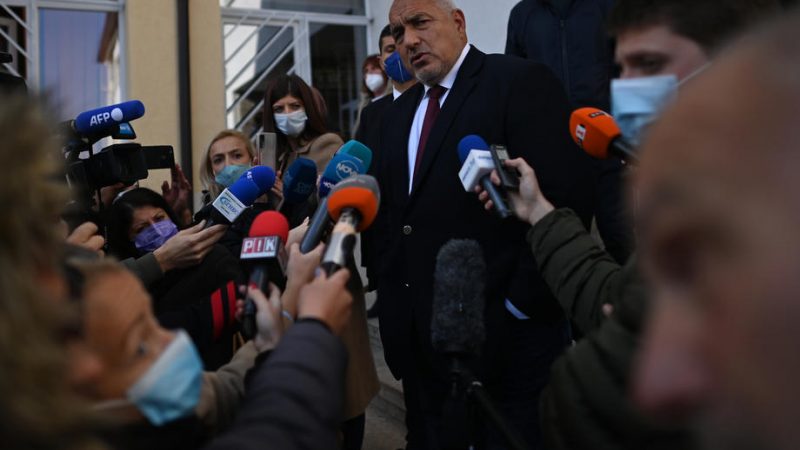 Borissov’s party is currently in opposition. He explained that the centre-right GERB could work with any party that supports the adoption of the euro, supports Ukraine, supports Bulgaria’s membership in the EU and NATO and works for full diversification of gas and oil supplies. [EPA-EFE/VASSIL DONEV]

The country should be ruled by a new Euro-Atlantic coalition, GERB leader Boyko Borissov said shortly after apologising to resigned Prime Minister Kiril Petkov for calling him a “coward” on Wednesday.

Borissov’s party is currently in opposition. He explained that the centre-right GERB could work with any party that supports the adoption of the euro, supports Ukraine, supports Bulgaria’s membership in the EU and NATO and works for full diversification of gas and oil supplies.

Borissov did not rule out any of them as a possible future partner. “You can always find a formula for these basic tasks, the judiciary, real reforms… To sit down and talk to the competent people of each party and solve them,” he said.

It is almost unthinkable for “Change Continues” and “Democratic Bulgaria” to enter into a coalition with GERB in this parliament because their main pre-election promise was the abolition of the “Borissov” model in the country’s government. Petkov immediately rejected Borissov’s offer.

“If Boyko Borissov decides to go to a warm island, I am sure we have ideas for a European Bulgaria with some of his deputies,” he said.

Petkov will resign on Monday (27 June) but will hold the post of prime minister until a new government is elected or parliament is dissolved. The prime minister said he would continue to keep a very clear line with whom he could form a coalition.

“The fight against corruption cannot happen as long as you have a coalition partner who was part of corruption,” he continued, addressing GERB, adding that he did not see such a coalition as an opportunity. “There can be no stability at any cost,” the prime minister said.

Borissov’s offer could be seen as building a strategy after the likely early elections in September this year. Most opinion polls suggest that the most likely basis for a post-election coalition will be the parties’ geopolitical orientation in parliament.

On one side are GERB, “Change Continues” “Democratic Bulgaria” (CC and DB are considering an inter-party coalition to run in the elections), and the MRF. In the middle is the BSP, a Russophile party that has proven to be a loyal and predictable partner in the current pro-European government.

In the extreme pro-Kremlin spectrum is the Vazrazhdane party, which will most likely be isolated in the next parliament. This party continues to gain support because of the war in Ukraine and is calling for Bulgaria’s withdrawal from NATO and renegotiation of EU membership.