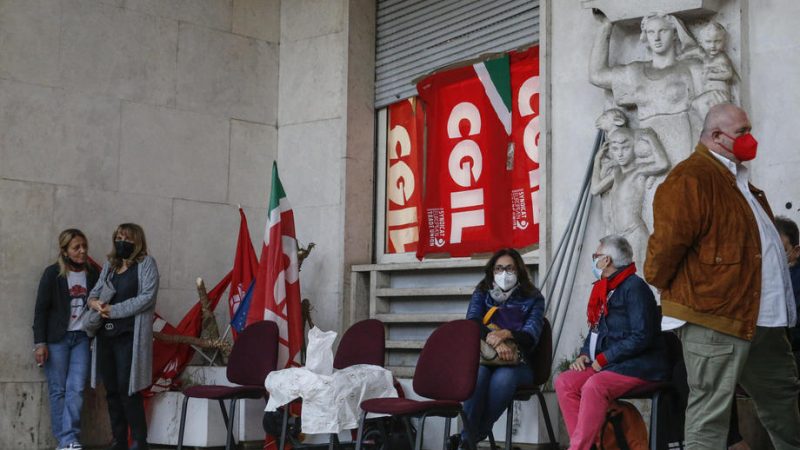 “Many thought that the emergency state linked to Covid could reduce the impact of these political forces. This was a delusion”, Muzzi said. [EPA-EFE / FABIO FRUSTACI]

Both the parliamentary and the extra-parliamentary far-right are gaining traction in the country, journalist Carlo Muzzi, author of “Eurosceptics: What movements are opposed to the European Union and what do they want” told EURACTIV in an interview.

“Many thought that the emergency state linked to Covid could reduce the impact of these political forces. This was a delusion”, Muzzi said. “Indeed, we have seen that COVID-19 turned into an excuse to bring these forces to the streets – against lockdowns, restrictions, the vaccine. And it is a phenomenon we have to deal with”.

Giorgia Meloni’s far-right Brothers of Italy has been leading in the polls for the past few months. The latest published on 11 October by SWG shows the party polls at 20.7%, followed by another far-right party (Matteo Salvini’s League) at 19.2%.

Currently president of the European Conservatives and Reformists party in the European Parliament, Meloni “is seeking backing on a European level to advance her position”, Muzzi explains. Last week, she was in Madrid as a guest of honour at the conference of the ultranationalist VOX party.

Both Brothers of Italy and the League have seen a slight decline in the polls – down 0.3 and 0.8% respectively – since September, and both did not fare particularly well in the administrative elections that took place in hundreds of Italian towns, including most of the country’s biggest cities, in early October.

The two parties have also been rocked by an investigation carried out by the national digital outlet Fanpage. The first part of the investigation showed local leaders of Giorgia Meloni’s party praising fascism with Roman greetings and Mussolini quotes. The second part involved the League and showed the attempts of neo-Nazi group Loyalty and Action to extend their influence within the party with the help of former MP Mario Borghezio.

“MPs are now discussing whether to dissolve neofascist movement New Force, but one fact remains: similar movements are emerging and gaining traction all over Europe”, says Muzzi. “In addition to the affirmation of the radical right, that still aims to play within a democratic logic, there are more extreme forces that are continually asserting themselves. And there are links between these large, mainstream right-wing parties and the more extreme formations”. It is estimated that there are at least around 440,000 extreme-right militants in Italy.

“What should be kept in mind, though, is that we are a founding state, as opposed to Poland and Hungary. The kind of pressure that is placed on Italy is different, so even if Meloni was in power, she might think twice before tampering with the rule of law”, Muzzi told EURACTIV.

“It is clear, however, that on a theoretical level, they are more inspired by the Eastern countries rather than by the historical nucleus of the Union,” Muzzi added.