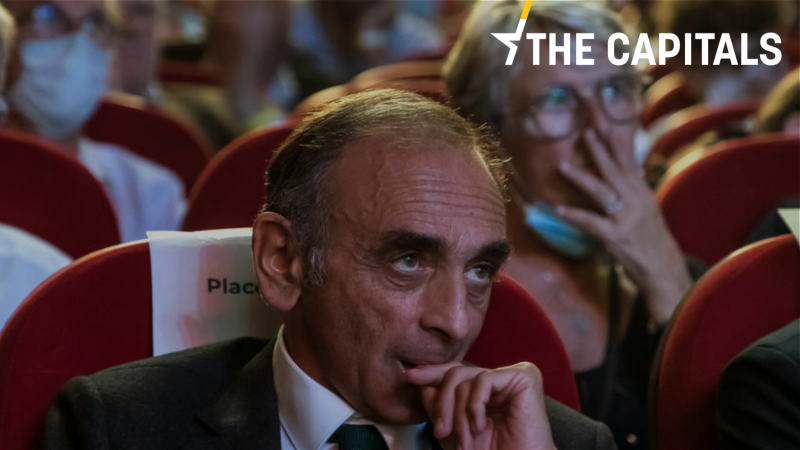 A new poll released on Wednesday has sent shock waves across the country. French far-right essayist Éric Zemmour has polled at 17% for the upcoming presidential elections, placing him second in the run for the Elysée and ahead of right-wing leader Marine Le Pen.

The result of the Harris Interactive poll was described as an “earthquake” by the French journal Challenges. Despite not having officially announced his candidacy, Zemmour now appears a favourite for the far-right electorate.

If elections were held today, Zemmour would come second after President Emmanuel Macron, who is running again, and currently polling at 24%.

While support for Zemmour has doubled within less than a month, far-right candidate and Rassemblement National leader Marine Le Pen has been in “free fall” since the summer, Challenges reports. Having lost 13 points, she now secured only 15%.

A political rookie, Zemmour appears to be taking advantage of Le Pen’s slump. Unable to beat Macron in the last election, the far-right leader again fell short of her ambitions in this year’s regional elections. Of those who supported Le Pen in 2017, 30% now favour Zemmour.

An unprecedented evolution that might overturn the political game only months before the next election. French news channel BFMTV promptly unearthed a statement made by Le Pen in 2017. “What matters to me is the defence of France”, the right-wing leader had declared, promising that “if one day, there is someone who is better placed than me to assemble the millions of French citizens who are needed to bring about the turnaround of our country (…), then I will step aside”.

However, faced with the mounting popularity of Zemmour, Le Pen doesn’t appear ready to make way yet. “Polling institutes got a lot of things wrong, whether it was at the last regional or European elections,” Rassemblement National spokesperson Sébastian Chenu told BFMTV, calling on everyone to “keep a cool head”.