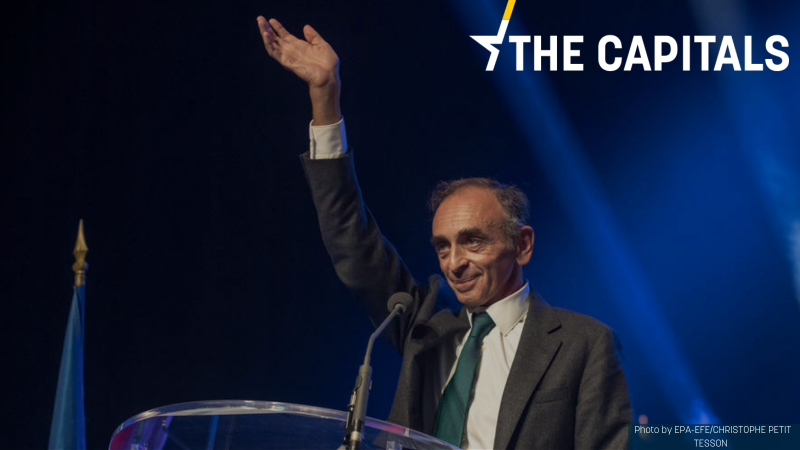 This announcement is "not the scoop of the century", said MP Nicolas Meizonnet (Rassemblement National) in an exchange with EURACTIV, describing the video as "anxiety-provoking" and "without perspective". [EPA-EFE/CHRISTOPHE PETIT TESSON]

In a sombre 10-minute video, full of historical and cultural references and attempting to recall General de Gaulle’s 18 June appeal, the far-right polemicist declared that he was running for president.

“It is no longer time to reform France but to save it. This is why I have decided to run for president,” he said, to the tune of Beethoven’s 7th Symphony.

The announcement comes after Zemmour’s performance in the first round of polls has faltered. According to the latest survey, conducted by the Harris Interactive institute for Challenges, he is now credited with 13% of voting intentions after Emmanuel Macron (23%), Marine Le Pen (19%) and Xavier Bertrand (14%) in the event the latter is chosen by the Republicans to represent the right.

“I have long been content with the role of journalist, writer, Cassandra, and whistleblower,” Zemmour said, adding that he wants to turn away from the “disastrous path of decline and decadence” that France had been following for years.

He called for reindustrialising the country, improving the trade balance, reducing debt,  protecting technological treasures, preserving heritage, restoring schools, and other lines that do not differ much from his competitors.

His observations, on the other hand, is different. “You haven’t moved and yet you have the feeling of not being at home. You haven’t left your country, but it’s as if your country has left you,” Zemmour said, noting that “immigration is not the cause of all our problems, although it aggravates them all” and that it was “necessary to take back power from minorities”.

Zemmour did not spare Europe either. He called for “reclaiming our sovereignty abandoned to technocrats and European judges who have stripped the French people of their ability to decide their own fate in the name of the chimaeras of a Europe that will never be a nation”.

“Long live the Republic and, above all, long live France,” he concluded, distorting the usual phrase.

The video made many headlines, but not for the reasons he hoped. It contains numerous archive images and film extracts for which Zemmour’s team did not acquire permission to include.

Television channels were thus unable to broadcast much of it. The Gaumont company, which owns the rights to the excerpt from the film “Joan of Arc” broadcasted without authorisation in the sequence, said it would consider taking legal action.

Invited to the TF1 news programme, Eric Zemmour later brushed aside the question, saying that he was not concerned with “legal wrangling”.

This announcement is “not the scoop of the century”, said MP Nicolas Meizonnet (Rassemblement National) in an exchange with EURACTIV, describing the video as “anxiety-provoking” and “without perspective”.

“This is rather good news for Marine Le Pen,” Antoine Bristielle, a political science researcher and director of the Jean Jaurès Foundation’s Opinion Observatory, told EURACTIV.

“Eric Zemmour, by having even more radical positions than Marine Le Pen, makes her look like a ‘normal’ candidate,” he said, stressing that “politics is not just a story of mathematics, and of candidates going up and down.”

According to him, Zemmour made it possible to enlarge the space granted to the radical right and brought public debate on the favourite subjects of the president of the National Rally, immigration and security. “These are the only items where she is considered more competent than Emmanuel Macron”, he added.

“Only Marine Le Pen has the solidity, the experience, the credibility of ideas to be able to win against Emmanuel Macron, our only opponent,” says Meizonnet, whose party does not completely close the door to the newly declared candidate.

“Marine has reached out to him. I think she will do it again in the coming weeks,” he said, regretting that “if he persists, he can weaken the national camp for the first round.

If he really wants to put forward a ballot paper with his name on it next April, Zemmour must gather 500 signatures from elected representatives. He said he had already collected between “250 and 300”.