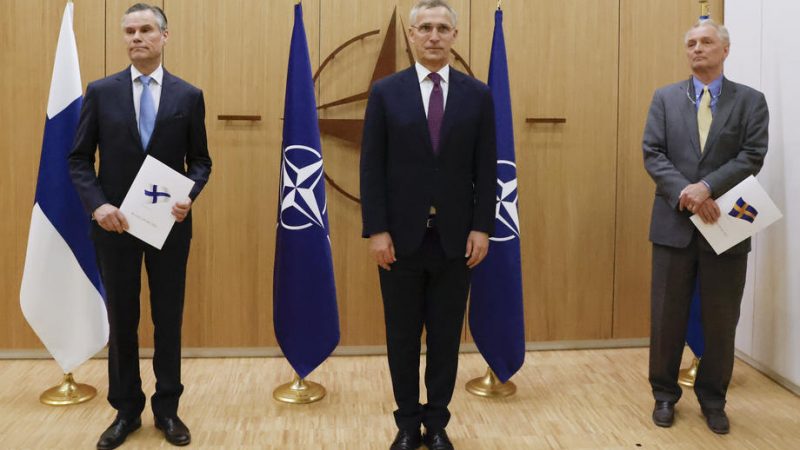 NATO Secretary-General Jens Stoltenberg welcomed the Swedish and Finnish ambassadors, Axel Wernhoff and Klaus Korhonen, to NATO’s headquarters in Brussels on Wednesday (18 May), while Nordic countries stood together closer than ever to ensure a swift application process. [EPA-EFE/JOHANNA GERON]

The Swedish and Finnish NATO ambassadors submitted their applications to NATO Secretary-General Jens Stoltenberg on Wednesday as Nordic countries close ranks to ensure their safety.

NATO Secretary-General Jens Stoltenberg welcomed the Swedish and Finnish ambassadors, Axel Wernhoff and Klaus Korhonen, to NATO’s headquarters in Brussels on Wednesday (18 May), while Nordic countries stood together closer than ever to ensure a swift application process.

“You have both made your choice after thorough democratic processes, and I warmly welcome the requests by Finland and Sweden to join NATO. You are our closest partners, and your membership in NATO would increase our shared security,” Stoltenberg said.

Stoltenberg called the dual application a historic step, adding that NATO is already vigilant in the Baltic Sea region and that NATO and the Allies’ forces will continue to adapt as necessary.

“All Allies agree on the importance of NATO enlargement. We all agree that we must stand together, and we all agree that this is a historic moment, which we must seize,” stated Stoltenberg.

Stoltenberg’s declarations echo the joint statement of support signed by the prime ministers of Denmark, Iceland, and Norway on Monday (16 May), where Nordic leaders welcomed the Finnish and Swedish decisions to join NATO while pledging support to the new applicants.

“Together with Denmark and Iceland, Norway is ready to assist with all necessary means if our Nordic neighbours are attacked before they formally become members of NATO,” said Norwegian Prime Minister Jonas Gahr Støre in a press release.

The Nordic countries also declared that they will do what is necessary to ensure a swift process as Finland and Sweden’s security is a “matter of common concern to all.”

“Should Finland or Sweden be victims of aggression on their territory before obtaining NATO membership, we will assist them by all means necessary. We immediately initiate preparations in order to effectuate these security assurances. We will also further develop our defence cooperation with Finland and Sweden,” the statement also reads.

According to previous declarations by the NATO General Secretary, should Sweden and Finland’s candidacies be accepted, both countries could join the Alliance within a fortnight.