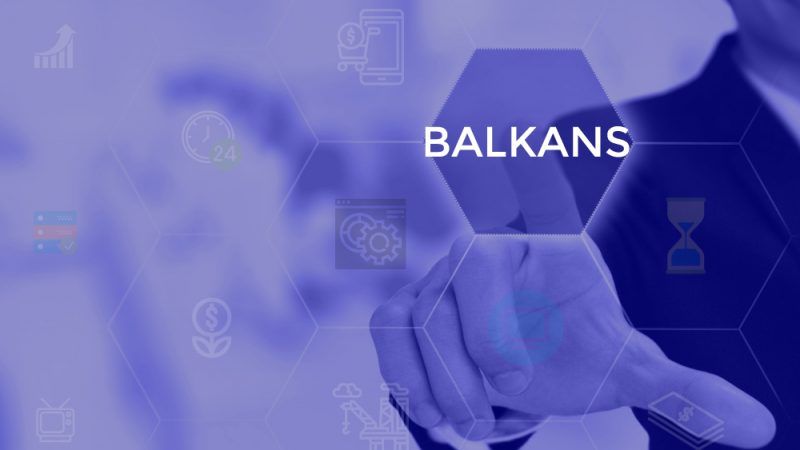 The agreement and memoranda tackle tax evasion, diploma recognition, and cross-border cooperation in tourism and culture, including a proposal to create an Open Balkan tourism map. [Shutterstock/G-Tech Studios]

The shadow of the war in Ukraine set the tone for the latest Open Balkan summit, which concluded with the leaders of North Macedonia, Albania, and Serbia signing a set of deals to deepen cooperation in the areas of education, tourism, culture, amid fresh controversy surrounding the initiative.

The agreement and memoranda tackle tax evasion, diploma recognition, and cross-border cooperation in tourism and culture, including a proposal to create an Open Balkan tourism map.

While Serbian President Aleksandar Vucic stressed regional cooperation, the Prime Ministers of North Macedonia and Albania turned their attention to the war and Russia’s influence on the Western Balkans.

“Our goal is clear, the Balkans must be part of the EU. The war in Ukraine creates opportunities for third countries to exert their influence, so we must work together to strengthen stability… Our vision for the Balkans is EU integration,” said Prime Minister of North Macedonia, Dimitar Kovačevski.

The spectre of Russia loomed large over the event after Russian Foreign Minister Sergei Lavrov issued a set of remarks that were interpreted in support of the initiative.

Lavrov was scheduled to visit Belgrade this week, but his visit was annulled after Bulgaria, North Macedonia, and Montenegro closed their airspaces to Russian aircraft, refusing to make an exception for Lavrov.

In his speech, Prime Minister Edi Rama tried to counter claims that the initiative had been Serbia’s idea, a criticism levied against the Albanian leader by his opponents at home.

“The ‘Open Balkan’ [initiative] does not belong to Serbia as we’ve heard these days, but to all the people who live here. It belongs to the Albanian farmers, and the closer we get, the more we are able to solve our issues and hostilities, including the issues between Kosovo and Serbia,” he said.

The Ohrid summit was attended also by representatives from Bosnia-Herzegovina and Montenegro, although the two countries—along with Kosovo—have so far refused to join.

While Montenegrin Prime Minister Dritan Abazović participated in the summit, he dispelled Rama’s claims that his attendance marked Montenegro’s official adherence to the initiative.

“We are not going to Ohrid to join the ‘Open Balkans’, but to express, together with the EU partners and NATO allies, our stance towards a regional initiative, so that we can ultimately have more understanding and better cooperation “, Abazović wrote on Telegram.

Nevertheless, the presence of Montenegro and Bosnia made Kosovo’s absence even more conspicuous, with all three leaders making direct appeals for Kosovo to join them during their opening remarks.

“The invitation is always open, but I fully respect the decision of the Kosovo authorities to leave their spot empty,” Rama said.

Kosovo has been wary of the initiative from its inception, arguing that the Western Balkans Six should focus their efforts on the EU-backed Berlin Process, where Kosovo’s interests are protected.

Kosovo leaders have also been sceptical of Serbia’s involvement, arguing that the latter’s close relationship to Russia makes the “Open Balkan” initiative susceptible to Russian influence.

Vućić also thanked EU Enlargement Commissioner Oliver Varhelyi for attending the conference to support the Open Balkan Initiative. The presence of the commissioner following Lavrov’s comments sparked controversy. Exit sent questions to his office, but they were not answered by the time of publication.

While the European Union has issued repeated calls for Serbia to impose sanctions against Russia for its invasion of Ukraine, the response from Belgrade has been equivocal. Last week, the two countries reached a deal, in principle, on a gas agreement to Serbia’s benefit.