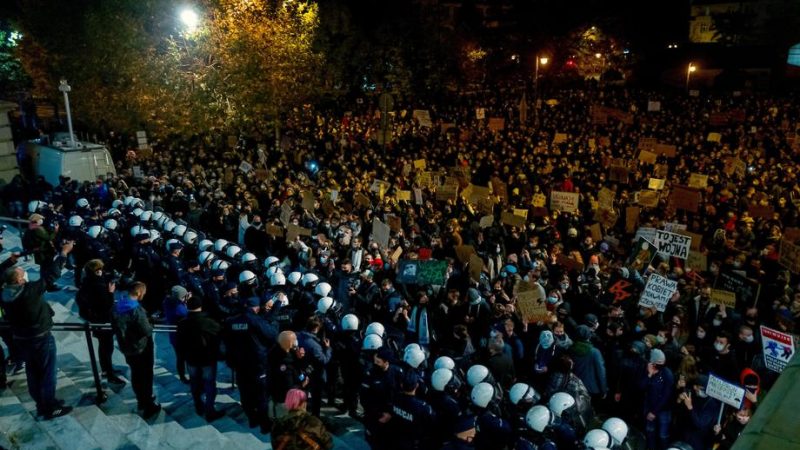 People stand in front of a Police cordon as they take part in a protest against the tightening of the abortion law in front of the Christ the King Archcathedral in Katowice, southern Poland, 25 October 2020. [EPA-EFE/ANDRZEJ GRYGIEL]

Sunday marked the fourth straight day of protests across Poland against Thursday’s Constitutional Tribunal ruling which imposed a near-total ban on abortion by holding that laws currently permitting abortion due to foetal defects are unconstitutional.

On Friday night (23 October), in Warsaw, thousands of protesters staged a protest in front of the home of ruling Law and Justice party (PiS) leader Jarosław Kaczyński, then continued their several-kilometre route to government buildings. Polish activists also protested during Sunday church services in Warsaw and other Polish cities, holding banners with slogans such as “Women’s hell is in Poland”.

While doctors performing pregnancy termination procedures could face prison sentences, women are at risk of losing their health or life by having to give birth even in cases when a neonatal death is certain and known in advance.

Despite the recent ban on gatherings of more than five people, thousands of people continued their protests against the Constitutional Tribunal’s ruling in many Polish cities, with demonstrations held in Warsaw, Gdańsk, Łódź, Katowice and Wrocław (and many others).

Władysław Kosiniak-Kamysz, leader of the agrarian Polish People’s Party (PSL), appealed to Prime Minister Mateusz Morawiecki on Saturday (24 October) not to publish the ruling “due to the state of emergency,” and wait until the pandemic is contained before carrying out a nationwide referendum on the abortion. The nation’s verdict should then be written into the constitution, he added.

“It’s time to stop the things that are happening. I appeal to the government to come to their senses, it’s still not too late and we can do some things that will normalise the situation and stop this ideological war so that we can focus on fighting the coronavirus,” Kosiniak-Kamysz told a press conference in Kraków on Saturday afternoon.

Current abortion laws in Poland are already very strict compared to other EU member states. Abortion is admissible if pre-natal tests reveal a high probability of irreversible damage to the foetus or its affliction with an incurable and life-endangering ailment. Other admissible cases include an immediate threat to a woman’s life and incest or rape.