By Mathieu Pollet | EURACTIV.com and EURACTIV.fr 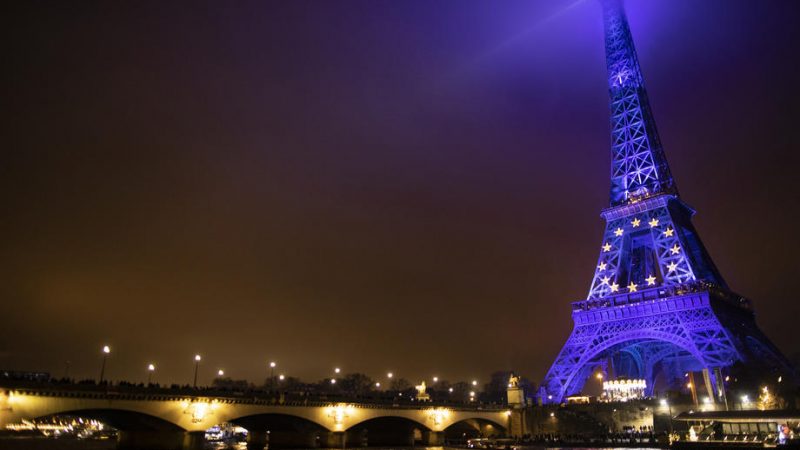 The Eiffel Tower is also illuminated in the colors of the European Union flag to mark the start of France presidency of the EU on 01 January. [EPA-EFE / IAN LANGSDON]

A large European Union flag attached under the Arc de Triomphe in Paris on Friday (31 December) to mark the start of France’s six-month presidency of the bloc was removed on Sunday after it drew outrage from far-right and right-wing leaders.

“Replacing the French flag with the sole European flag under the Arc de Triomphe is an attack on the identity of our country, an insult to the dead for the Homeland,” tweeted the presidential candidate for the far-right party-right Rassemblement National, Marine Le Pen. The far-right leader also announced she would challenge the decision before the Council of State, the highest French administrative court.

Valérie Pécresse, presidential candidate for right-wing party Les Républicains, also commented on the EU flag. “Presiding over Europe yes, erasing the French identity no! I solemnly ask Emmanuel Macron to restore our tricolour flag next to the European flag under the Arc de Triomphe,” she said.

Junior European Affairs Minister Clement Beaune, who on Friday had said the flag would remain for “several days”, said it had been taken down as planned.

“It was scheduled that the flag was to be taken down this Sunday; we hadn’t established an exact time”, Beaune told France Inter radio. He also recalled that when former President Nicolas Sarkozy welcomed the European Commissioners in 2008, the European flag had flown next to the French flag.

Beaune dismissed the idea that the government had given in after far-right leader Marine Le Pen on Saturday said she would appeal to France’s Council of State to remove the EU flag.

“The government has been forced to remove the EU flag from the Arc de Triomphe, a beautiful patriotic victory at the start of 2022”, Le Pen said on Sunday.

“We didn’t back down, there was no change of plan …I fully assume France’s destiny is in Europe,” Beaune said.

Like many monuments throughout France that have been decked out in EU colours, such as the Eiffel Tower, Paris wanted to fly the European flag under the Arc de Triomphe to mark the start of the rotating EU Council presidency that France will hold in the first half of 2022.

Faced with much criticism from the right, EU Affairs Minister Clément Beaune was keen to point out that the EU flag had not “replaced” the French one as it was only displayed for official ceremonies.

Supposed to be flown for only a few days, the European flag was already taken down on Sunday after an “early” withdrawal, according to BFMTV. “A beautiful patriotic victory at the dawn of 2022,” said Le Pen.

On Sunday, Ségolène Royal, a key figure of the French left, joined the far-right and the centre-right in criticising the decision to fly the EU flag under the Arc de Triomphe during a debate on LCI television, calling it a moral mistake. Surprisingly, her opponent Luc Ferry, representing the centre-right, supported the decision to fly the flag, saying that without the EU, France would be “nowhere” economically and in terms of vaccination against Covid 19. Ferry, a philosopher, served as Education Minister in the cabinet of Jean-Pierre Raffarin.

This first controversy of the year 2022 promises a very politicised EU Council presidency as all opposition parties are eager for a chance to unsettle President Emmanuel Macron ahead of the April presidential election.