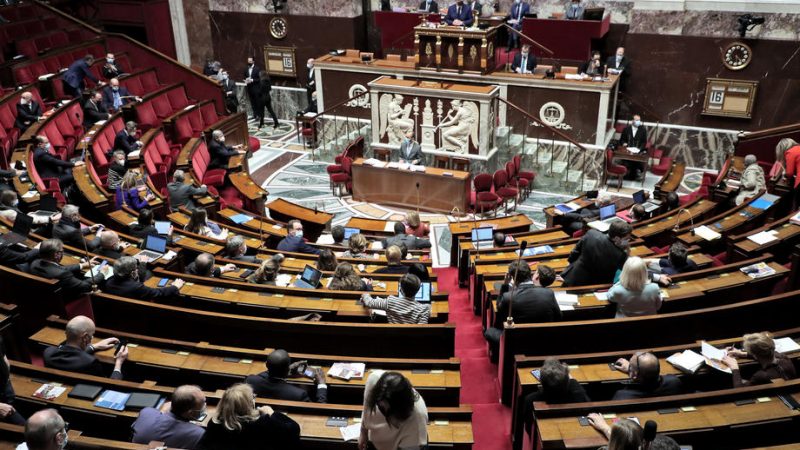 French members of parliament attend the final debate ahead the vote of a bill instituting the compulsory vaccinal pass and a series of health measures aimed to reduce Covid-19 positive cases and the rise of the Omicron variant, at the National Assembly in Paris, France, 16 January 2022. [EPA-EFE/CHRISTOPHE PETIT TESSON]

The French National Assembly has adopted the bill introducing the vaccine pass on Sunday evening (16 January). The pass will come into force by the end of the week,  replacing the sanitary pass, and granting access to restaurants, transport, venues that will no longer be accessible with PCR or antigen tests.

After nearly two weeks of fiery debates, the MPs approved the introduction of the vaccine pass with 215 votes in favour and 58 against.

Most votes in favour came from the presidential majority of President Emmanuel Macron’s La République en Marche. However, many MPs from the right-wing Les Républicains camp also voted in favour of the bill, despite some debate on substance.

Although the last word on the final version was left to the National Assembly, the changes made in the Républicains-led Senate were kept by the MPs. For example, while the government wanted the vaccine pass to apply to people above 12, it now applies to everyone above 16.

The National Assembly also approved identity checks by restaurant workers despite the opposition saying this should be the prerogative of law enforcement officials. According to the government, it would not qualify as an identity check as it was not systematic, nor did it come with a fine or penalty.

The vaccine pass is expected to come into force in the next few days, later than the government’s planned schedule. When the new scheme comes into effect, it will prohibit the unvaccinated from entering places like cafés, restaurants, cinemas and clubs.