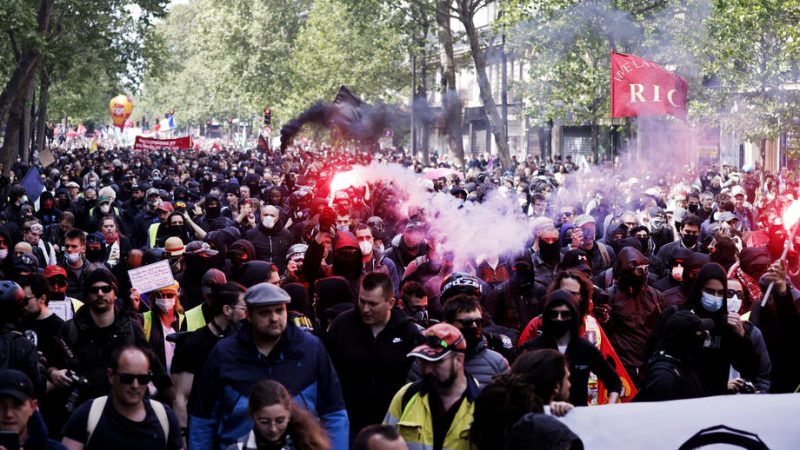 Thousands gathered across several French cities to participate in Labour Day demonstrations on 1 May, just a week after French President Emmanuel Macron was re-elected and as parties gear up for legislative elections in June. In a symbolic move, the same day Jean-Luc Mélenchon’s La France insoumise (LFI) reached a deal with Julien Bayou’s Europe-Ecologie-Les-Verts (EELV).

The deal was reached late last night and would foresee a rise in the minimum wage to €1,400, retirement at 60, and a price freeze on basic goods.

Julien Bayou of Europe-Ecologie-Les-Verts (EELV) was also present at the protest in Paris and said the Greens could be part of the leftist coalition.

“We’re here to put pressure on the left to unite for the legislative elections,” Vincent, an activist for Jean-Luc Mélenchon’s Popular Union, told EURACTIV France. “There is an atmosphere of hope today. Victory is within reach,” he added.

Calls to reduce the retirement age to 60, protect public services, and promote the ecological transition, were seen on placards and slogans.

Mélenchon, who announced that he wanted to become prime minister if his movement obtained a parliamentary majority, addressed the crowd in the early afternoon to reiterate the call to join him in a grand coalition.

Negotiations with other left-wing parties to ally ahead of the legislative elections are currently underway. “I think we are a few millimetres away from reaching an agreement,” said Mélenchon, giving himself until the end of the weekend to find a deal.

Mélenchon then met with socialist leader Olivier Faure, suggesting a rapprochement is possible. “I can’t even tell you, at this time, if we will conclude the agreement in the coming hours or days,” the Socialist leader told Le Monde.

The event was also marked by violent clashes between the police and demonstrators. According to the interior ministry, eight policemen and firefighters were injured, and 45 people were arrested. At the end of the day, the Parisian boulevards were lined with broken windows.