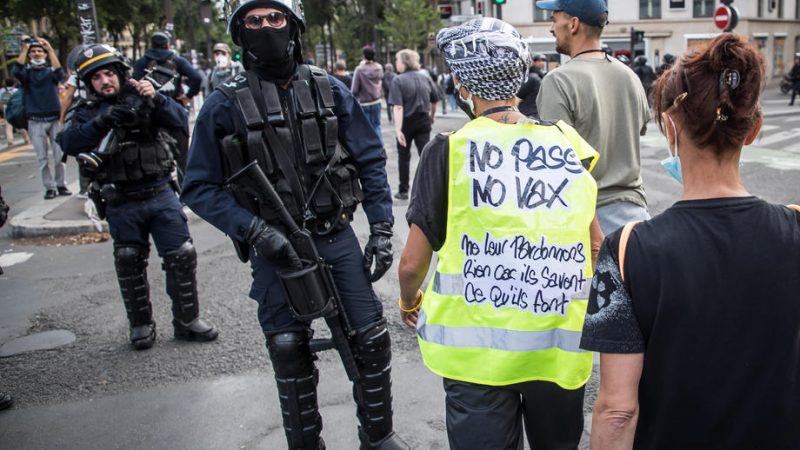 A protester wearing a yellow vest reading 'No Pass No Vax' during a demonstration against the COVID-19 health pass. [EPA-EFE / CHRISTOPHE PETIT TESSON]

MPs received emails threatening them with a “hail of bullets” or having their head cut if they voted in favour of the draft bill, while LREM deputy Pascal Bois saw his garage and car burned and the walls of his house tagged.

Responding to the death threat on Twitter, French MP Agnès Firmin Le Bodo declared that “no threat will dictate my way of voting”, calling for an “urgent” reaction of the country’s political class as “our democracy is in danger”.

France is currently registering a new peak in COVID-19 infections, with a daily average of 160,000 new cases over the past week due to the Omicron variant.

While new restrictions for school, work and transport came into force Monday, political life has also been impacted as an increasing number of politicians are testing positive for COVID-19 – including Equality Minister Élisabeth Moreno and National Assembly president Richard Ferrand.

Far-right leader Marine Le Pen of the Rassemblement National party even announced she would postpone the launch of her presidential campaign for the April elections to early February rather than the initial 15 January date due to the worrying health situation, EURACTIV’s partner Ouest-France has reported.