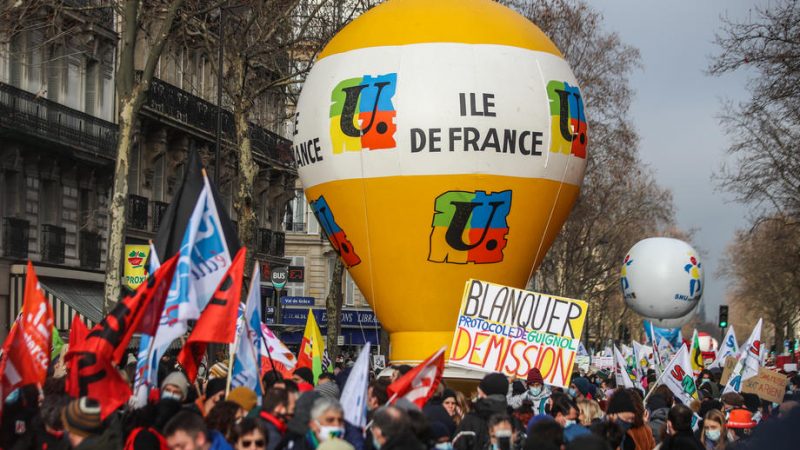 Teachers attend a rally during a nationwide strike over coronavirus measures in schools, in Paris, France, 13 January 2022. Tens of thousands of teachers all over France took to the streets to protest against what they claim to be a government failure to adopt a coherent policy to tackle Covid-19 in schools. [EPA-EFE/Mohammed Badra]

While unions announced a “historical mobilisation” with 75% of teachers on strike to protest against the management of COVID protocols in schools, only 31% of teachers were actually absent on Thursday, the French education ministry said.

The participation was certainly lower than expected, but it still reflects the deep dissatisfaction of education professionals. Teachers’ unions were not alone in calling for a strike: they were joined by the unions of school headmasters, parents, and national education inspectors.

The existing tensions with Minister Jean-Michel Blanquer have been exacerbated because of sanitary protocols management and their complexity, which makes implementation challenging, according to the strikers.

The new rules applicable in schools were communicated only a few hours before the start of the academic year on 3 January, before being modified again this week. The cumbersome nature of the rules has also overburdened both schools and parents, who were supposed to test their children three times in five days.

In addition, the unions complain that safety is not guaranteed in schools. They ask for FFP2 masks to be distributed to teachers and for air purifiers and CO2 detectors to be installed.

But this crisis goes beyond the health context: the row with the Minister is also deeply political, as he is accused of not consulting teachers. Furthermore, teaching unions say working conditions in schools have been deteriorating for several years.

However, teachers and trade unions do not disagree with the government’s keeping classrooms open. France is the leading country in Europe, with just 12 weeks of class closures since the beginning of the pandemic. Belgium and the UK had 27 weeks of full school closures, and Italy and Germany 38 weeks.