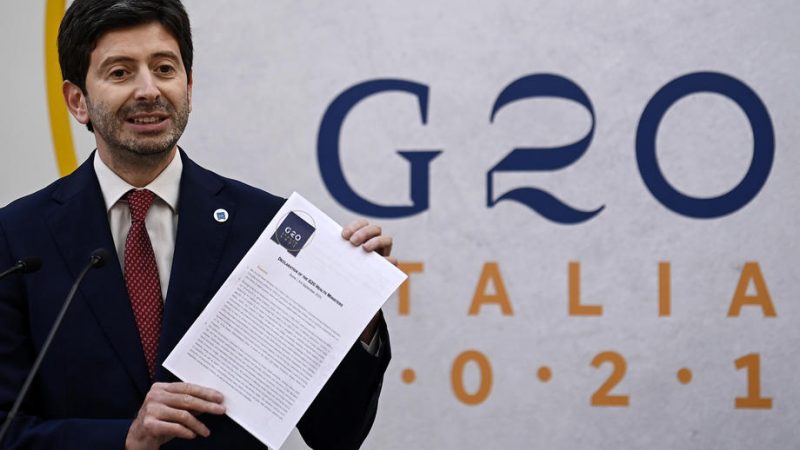 But NGOs are considering the commitments made by G20 ministers to be too weak. [EPA-EFE/Riccardo Antimiani]

G20 health ministers meeting in Rome have unanimously signed the ‘Rome Pact’, committing to increase the support of poor nations and send them more COVID-19 vaccines in order to meet a 40% vaccination target for the global population by 2021.

It is a “great result”, said Italian Health Minister Roberto Speranza, who recalled how last year’s G20 ended without a final declaration.

The health minister also pointed to the shared commitment made by health ministers to have a general relaunch of health services and have universalism as a compass in the post-COVID era.

The G20 countries have pledged to allocate “significant” resources and to send vaccines directly to the most fragile countries. This “is already happening but we must strengthen the system,” the minister said.

According to the Gavi Vaccine Alliance, the funds needed to secure the vaccine everywhere would amount to €1.7 billion.

“A few weeks from now, there will be a meeting of health and finance ministers. It will be a decisive moment in which to identify the specific resources to finance all the instruments put in place,” the Italian minister said.

But NGOs are considering the commitments made by G20 ministers to be too weak.

“In the response to the pandemic, in terms of global access to vaccines, no decisive and concrete step has been taken for the definition of medium and long-term strategies and tools, which, in the face of future pandemics, will allow us to change the paradigm and put an end to the shameful inequalities in access to treatments and vaccines,” said Sara Albiani, Oxfam Italia’s global health policy advisor, and Rossella Miccio, President of Emergency.

Vittorio Agnoletto, the Italian spokesperson for the European Right to Care – Right2cure – No profit on the pandemic campaign, stated instead that “the G20’s choice to ignore the proposed moratorium for patents on vaccines is shameful and indecent.”

The ‘Rome Pact’, “shares in words the WHO objective of vaccinating 40% of the world population by 2021, but then it proposes the same tools that have been used up to now: another donation plan, when the Covax project has already failed; and an appeal to companies to increase voluntary technology transfer,” Agnoletto added.