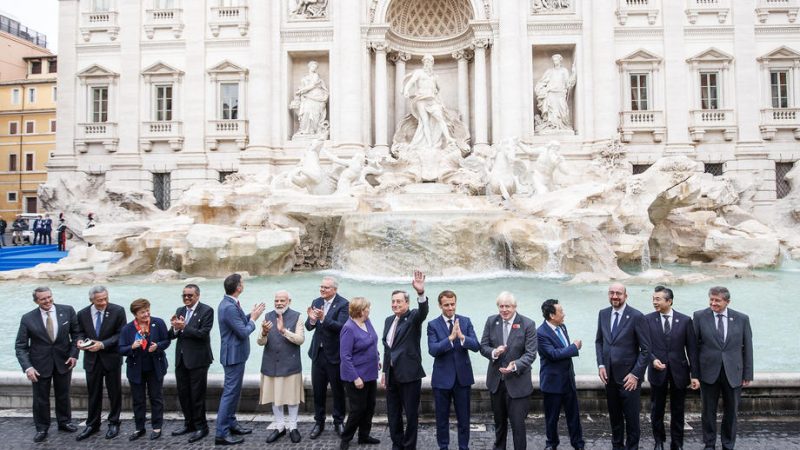 “We would have preferred that all countries had confirmed the 2050 deadline for zero emissions, but in my opinion, we will gradually get there”, Draghi said in his closing remarks. [EPA-EFE / ROBERTO MONALDO / LAPRESSE]

Although the Italian government – which currently holds the G20 presidency – was hoping to convince fellow G20 leaders to commit to achieving carbon neutrality by 2050, the final declaration presented at the end of the summit only featured a commitment to achieving global net-zero greenhouse gas emissions was postponed to “by or around mid-century”.

The change in the text is linked to the fact that China aims to achieve carbon neutrality by 2060 instead. The closing communiqué also promises to create a yearly $100 billion fund “to address the needs of developing countries” in terms of climate change mitigation.

Participants also pledged to limit the increase in average global temperature to 1.5°C by 2030. Unfortunately, discussions on what policies and regulations will have to be implemented to achieve this goal will most likely occur in Glasgow, where COP26 will take place between 31 October and 12 November. According to Italian prime minister Mario Draghi, the 1.5 °C commitment is already a historic win: “For the first time, all G20 countries acknowledged the scientific merit of the 1.5.-degree goal”, he commented.

“We would have preferred that all countries had confirmed the 2050 deadline for zero emissions, but in my opinion, we will gradually get there”, Draghi said in his closing remarks. “Compared to the previous situation, the communiqué’s wording today is a little closer to the 2050 goal than before. It’s not precise yet, but it was absent before”.