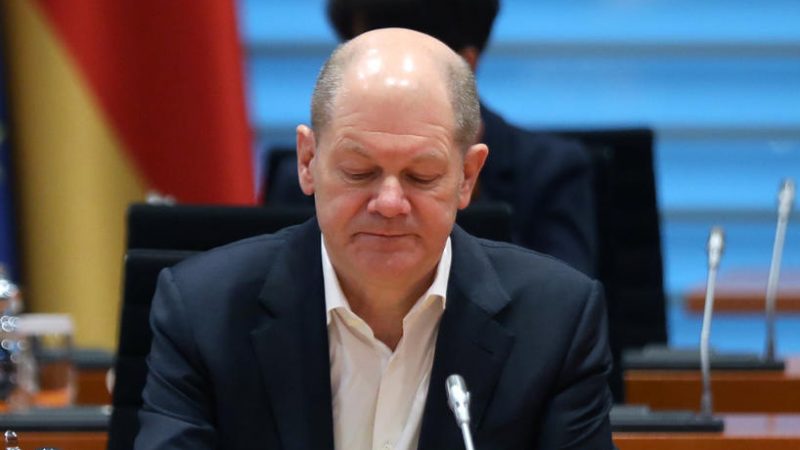 German Chancellor Olaf Scholz attends a security meeting of the Federal German Cabinet on the situation in Ukraine, in Berlin. [EPA-EFE/RAINER KEUENHOF / POOL]

The €100 billion the German government announced it would spend on military equipment on Sunday does not mean extra spending is on the table in other areas, a German government spokesperson stressed on Monday.

Germany will spend an extra €100 billion on defence through a special fund and disburse more than NATO’s 2% target each year from now on, Chancellor Olaf Scholz announced on Sunday. The announcement is widely considered a major policy shift.

While the announcement was welcomed among Germany’s EU and NATO partners, critics questioned why the government was ready to increase military spending while refusing to take up debt and spend more on areas such as health or education.

Asked by reporters whether the additional military spending meant a special fund could also be raised to reward healthcare workers financially, the spokesperson made it clear that the €100 billion was a ‘one-off’ and that the government was still committed to the debt brake.

“On top of all the measures that are necessary in this country and that we support as a government, we are now taking additional measures in the face of a changed international environment,” he said. “This is why the special fund does not mean that we can spend additional money within the regular budget,” he added.

The spokesperson also said that Finance Minister Christian Lindner of the business-friendly FDP was very clear that debt should be reigned in.

Germany’s national debt brake limits new debt to 0.35% of the country’s GDP each year. Within the governing coalition, Lindner’s FDP is the party that most fervently insists on sticking to this rule.