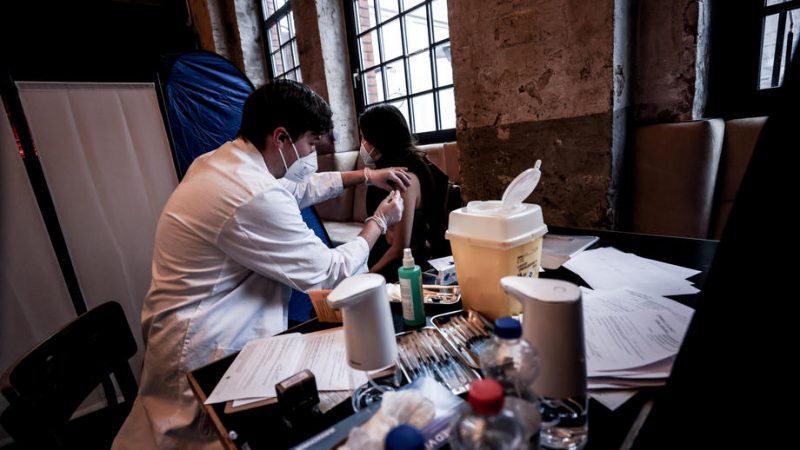 A woman is vaccinated against the coronavirus (Covid-19), inside the Sage Beach Bar and Restaurant in Berlin, Germany, 04 January 2022. [EPA-EFE/FILIP SINGER]

The two biggest parties in Germany’s government coalition – Olaf Scholz’s Social Democrats (SPD) and the Greens – are in no hurry to call a parliamentary vote on mandatory vaccination despite both supporting it.

Germany’s new government has considered compulsory vaccination since it came into office in early December. But while the coalition parties have agreed to put the question to a vote in the federal parliament, the Bundestag, they do not seem to have clear plans on when this will happen.

Mandatory vaccines would not work as a short-term measure but could “be used with a longer-term view as a precaution for the coming autumn and winter,” the SPD faction’s vice-chief, Dirk Wiese, told the daily Tagesspiegel on Sunday. He added that the Bundestag should aim to conclude the parliamentary debate on the matter by the end of March.

The Greens, too, seem to think the issue should be given more time before being put to vote. “This is not an easy decision, as it would mean a deep infringement,” the party’s faction leader, Britta Haßelmann, told the Funke Media Group. The question would need “well-founded and very careful deliberations,” she said, although she voiced support for mandatory vaccinations.

The government has agreed to make the Bundestag vote a so-called “Gewissensabstimmung”, that is, to make it a ‘conscience’ vote without party whipping.

The move has been interpreted as a way for the liberal FDP to save face. During the election campaign, the party had run on a platform of personal freedom and opposition against more restrictive measures such as a vaccine obligation.

However, after mandatory jabs gained support within the new government due to this winter’s surge in cases, the free parliamentary vote is seen as a way to pass the measure without the FDP having to change its official party line.