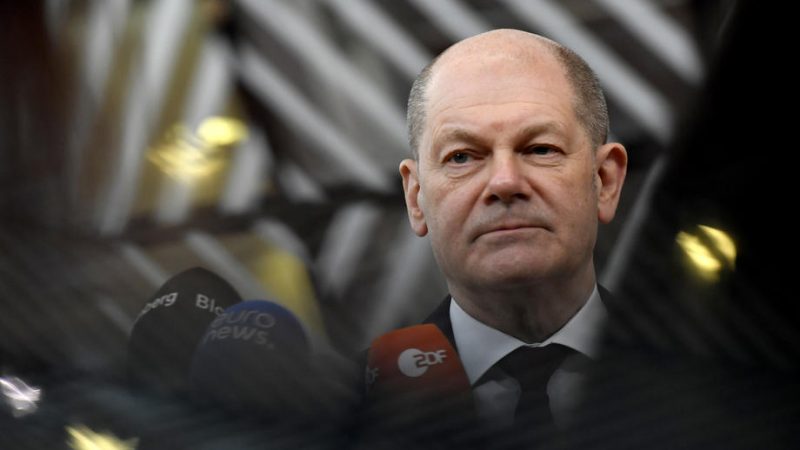 German Chancellor Olaf Scholz speaks with the media as he arrives for an European Union-African Union summit at the European Council building in Brussels, Belgium, 17 February 2022. [EPA-EFE/GEERT VANDEN WIJNGAERT]

The Ukraine crisis and the question of a vaccine mandate have taken their toll on the popularity of Germany’s political leadership, with one in three being “dissatisfied” with Chancellor Olaf Scholz, according to new polls.

One in five approve of Scholz’s work compared to the one in four that did just a month ago, data released on Thursday by polling institute Ipsos shows.

More drastic is the surge in those unhappy with the chancellor’s policies, with 33% saying they are “dissatisfied” with them, compared to just 18% last month. At the same time, dissatisfaction with the government jumped from 23% in January to 32% now.

The polls come after Germany’s public discourse in recent weeks was dominated by the buildup of Russian troops at the Ukrainian border and the Western allies’ reaction to the crisis. The ongoing debate around a general vaccine mandate has also been divisive.

Meanwhile, Bavarian Prime Minister Markus Söder of the conservative CSU pinched the top spot in the approval ranking. He recently became a focus of attention for refusing to make jabs mandatory for hospital and care workers – a step that Scholz and the regional leaders had previously agreed on.

Earlier this month, the leading opposition party, the conservative union of CDU and CSU, also surpassed Scholz’s Social Democratic Party (SPD) in the polls for the first time since they won the elections in September.

The conservatives have strongly criticised Scholz’s approach to the Ukraine crisis and called for a tough stance vis-à-vis Russia.