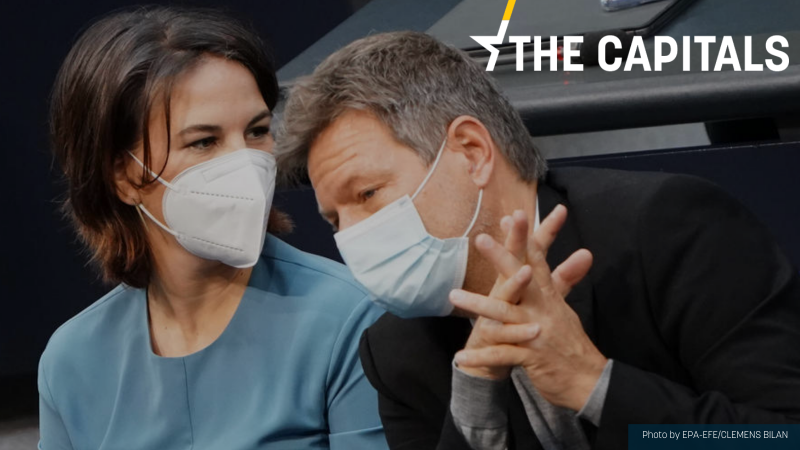 Should the Green membership reject the coalition deal, the parties must return to the drawing board. [EPA-EFE/CLEMENS BILAN]

Following the announcement on Wednesday that a “traffic light” government had been agreed, the social democrat SPD, the Greens and the liberal FDP must now announce a cabinet of 17 ministers split between the parties.

The Greens, traditionally split into left-wing and pragmatist wings, began their transformation when Annalena Baerbock and Robert Habeck, both pragmatists, assumed co-leadership of the party in 2018.

The moderate Cem Özdemir is pegged to assume the ministry for agriculture, Habeck the economy and climate ministry, and Baerbock the foreign ministry.  The result is, all the prominent ministries the Greens obtained are in moderate hands.

From the left wing of the party, Steffi Lemke will become minister for environmental protection, a slim ministry as climate protection is the prerogative of Habeck, while Anne Spiegel will be minister for families.

Since most observers had expected left-wingers Anton Hofreiter and Katrin Göring-Eckardt, co-leaders of the Greens’ parliamentary faction, to be given posts as ministers, the announcement demonstrates the erosion of the left-wingers’ power-base in the party.

As the Greens’ must obtain a majority vote of its members in the next ten days to form a government with the SPD and FDP, the left-wingers may now take the opportunity to remind the pragmatists of their power within the party.

Should the Green membership reject the coalition deal, the parties must return to the drawing board. Even a tight vote would be a bad signal for the coalition’s stability.