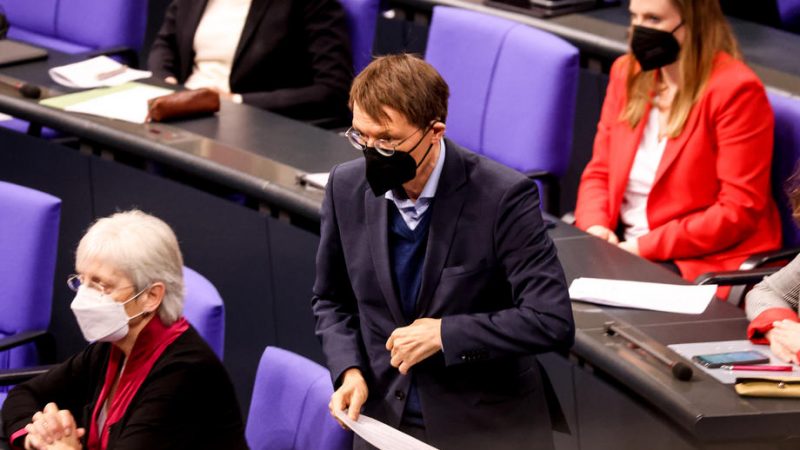 German Federal Minister of Health Karl Lauterbach (C) attends a session of the German Bundestag in Berlin, Germany, 26 January 2022. German lawmakers are debating proposals on whether to introduce mandatory COVID-19 vaccination in the country. [EPA-EFE/FILIP SINGER]

Lawmakers are divided beyond party divides following the Bundestag’s first debate about mandatory vaccines on Wednesday.

The debate was meant as a first exchange of views on whether and how Germany should implement compulsory vaccination. MPs were divided without a clear majority solution emerging.

A general vaccine mandate would be less severe than “the health threats posed by a strategy of herd immunity through infection” or the continuation of restrictive measures, the Social Democrat’s parliamentary vice-chief, Dagmar Schmidt argued.

Speaking to Berlin journalists on Tuesday, the president of the Standing Committee of European Doctors (CPME), Frank Ulrich Montgomery, also backed a general obligation. “We need to do everything we can to make sure that this autumn and winter will be better”, he said.

In contrast, Bundestag vice president Wolfgang Kubicki of the liberal FDP staunchly opposed the plans, stating that individuals may have “legitimate religious or psychological reasons” for declining the vaccine.

“The case for getting jabbed convinces me; the case for mandatory jabs does not”, he said.

His party colleague, Justice Minister Marco Buschmann, proposed a third alternative. Citing experts’ judgements that those who are not vaccinated and over 50 years old are most at risk, Buschmann said a  partial obligation for those over 50 should be “carefully considered”.

The German government has decided not to table a draft law and instead leave it up to parliamentary groups to come up with proposals – an approach that has been strongly criticised.

“You’re hoping that someone else will present you with a plan for mandatory vaccination if you wait long enough,”  said Conservative MP Tino Sorge, who accused the cabinet of “hiding”.