Germany, France to go into lockdown 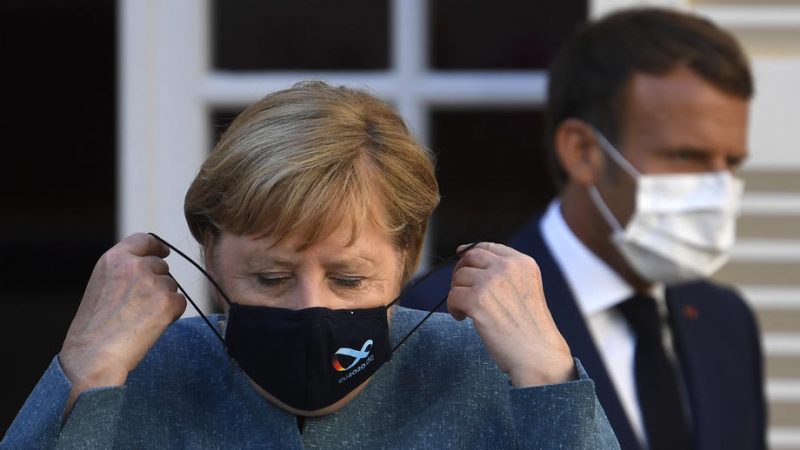 German Chancellor Angela Merkel wears a face mask as she arrives with French president Emmanuel Macron for a press conference after a meeting in south-east of France, 20 August 2020. [EPA-EFE/CHRISTOPHE SIMON]

French President Emmanuel Macron and German Chancellor Angela Merkel ordered their countries back into lockdown on Wednesday, as a massive second wave of coronavirus infections threatens to overwhelm Europe before the winter.

Merkel announced new coronavirus restrictions aimed at slowing the spread of infections, which has drastically spiked in the past few weeks. All bars and restaurants, except for takeaway and delivery, as well as gyms, museums, and theatres will be closed as of Monday (2 November).

“We need to take action now,” Merkel said. “Our health system can still cope with this challenge today, but at this speed of infections it will reach the limits of its capacity within weeks.”

At the same time, France will have to go into lockdown for a second time from Friday (30 October) until at least 1 December, announced President Macron, noting that it is his “responsibility is to protect all French people”.

Anyone leaving their home in France will now have to carry a document justifying being outside, which can be checked by police.

In recent months, Macron said that he would “do everything to prevent” a repeat of the first lockdown, which saw the closure of schools, non-essential businesses and borders, as well as restricted movement from 17 March to 11 May.

Though the new measures will allow schools to stay open, encourage teleworking where possible and permit visits to old peoples’ homes and thus be less strict than those imposed during spring, the president warned that “the second wave will undoubtedly be harder and deadlier than the first.”

French authorities fear the saturation of intensive care units (ICUs). By Thursday, the number of patients in ICUs reached 2,900, which is half the number of available ICU beds throughout France.