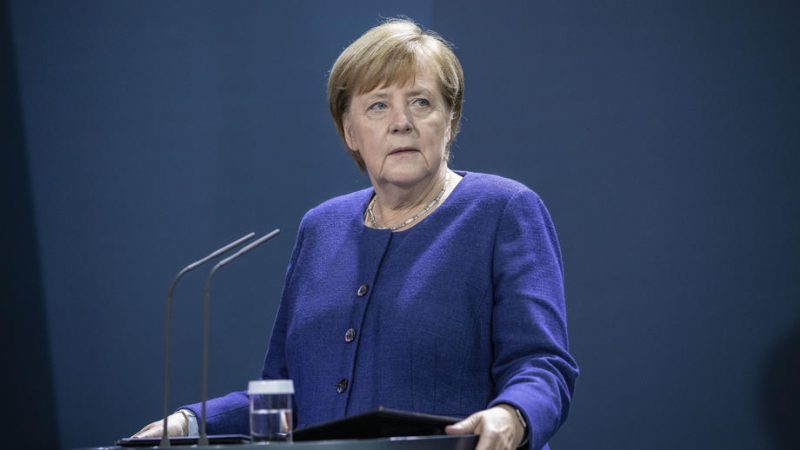 After Merkel promised the future US administration that Germany would be more involved in security policy, her finance minister Olaf Scholz dampened expectations that Germany will achieve the 2% GDP spending target on defence in the foreseeable future. [EPA/ Maja Hitij]

Germany and Europe are ready to contribute more to the transatlantic relationship, German Chancellor Angela Merkel said on Monday. However, many saw comments by her finance minister dampen those expectations.

Speaking in Berlin, Merkel said, “we, Germans and Europeans, know that in this partnership in the 21st century we have to take on more responsibility.”

“America is and will remain our closest ally, but it expects more from us — and rightly so,” Merkel said, adding that “we are working on it” to contribute more to the transatlantic relationship.

Eager to move on from President Donald Trump’s critical view of Germany, Merkel said her country, as part of the EU, and the US must work side by side to tackle COVID-19, global warming and terrorism, and to champion free trade.

However, her attempt to repair fractious German-US relations after Trump repeatedly publicly criticized Merkel and scolded Berlin for not spending more on defence, might already face first cracks.

Just after Merkel promised the future US administration that Germany would be more involved in security policy, her finance minister Olaf Scholz (SPD) dampened expectations that Germany will achieve the 2% GDP spending target on defence in the foreseeable future.

“The federal budgets for 2020 and 2021 are dedicated to the fight against the corona pandemic. In order to be able to counteract with full force, we have specifically used the exception clause of the debt rule in the Grundgesetz,” Scholz told RND.

“Hopefully we will have survived the health consequences of the pandemic in the next year, but the economic consequences will be felt for much longer – the financial planning must take this into account,” he said.

“We have all just become very aware of the value of a good health system, a strong welfare state, and an efficient community – all of this has to be financed sustainably,” Scholz concluded.

Although allies expect defence spending would be conducted in a different style than under Trump, experts said Washington’s demands for Europe’s security commitments will likely remain.