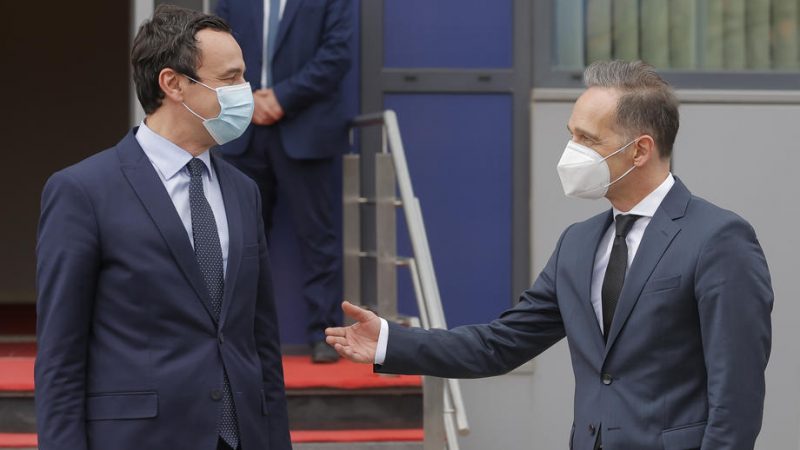 German Foreign Minister Heiko Maas has rejected a redrawing of borders in the Western Balkans along ethnic lines and the idea has been “put back into a drawer”.

Speaking during a joint press conference with Kosovan President Vjosa Osmani, Maas reiterated that Germany opposes redrawing borders in the Balkans, which according to him “belongs to the past”, is dangerous and unrealistic.

A document proposing controversial border changes across the Western Balkans caused a political storm in the region and in Brussels last week by suggesting that the creation of a Greater Serbia, a Greater Albania and a Greater Croatia could help resolve national tensions holding up EU integration in the region.

Asked by EURACTIV, European Council President’s Charles Michel’s office could not deny receiving the paper or provide any further comment.

“I want to emphasise that we consider unrealistic and very dangerous any ideas of drawing lines on maps,” Maas said.

The German foreign minister also said recognition of Kosovo by Serbia will be one of the elements of the EU-sponsored dialogue and told the parties that compromises are needed to reach a solution. Read more.

“Of course, recognition of Kosovo will be one of the elements of the solution. It is normal to have compromises in the dialogue on normalisation,” Maas said during his official visit to Pristina on Thursday.

“I don’t want to draw red lines. I know that because of the historical circumstances it will be difficult, and I don’t want to make the process more difficult, but in the end, solutions must be found for all issues,” the German minister said.

In turn, Kosovo President Osmani said that the dialogue between Kosovo and Serbia needs a “reset” and Priština will not “enter adventures on changing borders.”

EURACTIV understands that the issue of the non-paper is not on the agenda of the EU’s foreign affairs ministers’ meeting with their Western Balkan counterparts in May, but could be raised by participants as “any other business”.