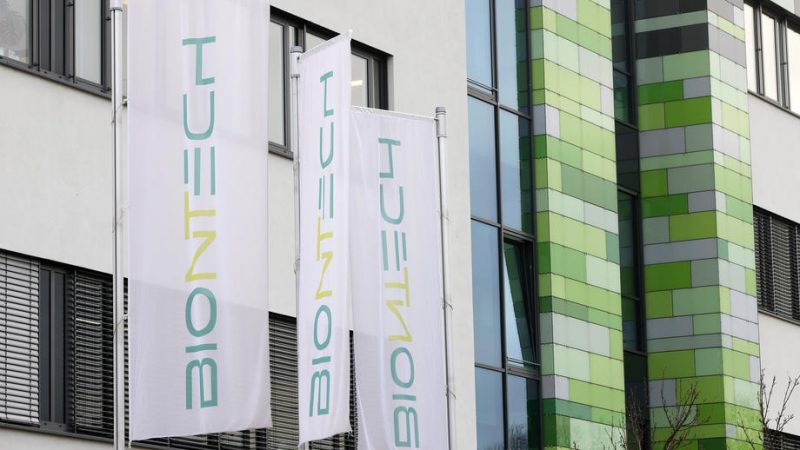 An exterior view of a building with flags of biopharmaceutical company BionTech in Mainz, Germany, 13 December 2021. [EPA-EFE/RONALD WITTEK]

Berlin wants to purchase vaccine doses from Poland, Romania, Bulgaria, and Portugal to secure supply for its booster campaign. The European Commission has also approved the early delivery of 35 million Moderna doses to Germany, the new health minister told journalists on Thursday.

In light of the more contagious Omicron variant, health minister Karl Lauterbach said during a press conference that a speedy booster campaign will be critical.

To implement the government’s vaccine strategy, 70 million doses would be needed during the first three months of 2021, while, so far, a supply of only 50 million doses is expected, Lauterbach said.

To fill the gap, Germany is looking to manufacturers and other countries for additional doses, the minister confirmed. Lauterbach said he was in talks with Bucharest, Warsaw, Sofia and Lisbon.

In addition to the early delivery of 35 million Moderna doses, the government has also announced that it is looking to purchase 80 million doses from Biotech via EU contracts.

Communicating to EU countries that they should drive up vaccination rates would be one of Germany’s priorities at the EU level, a government spokesperson told journalists on the sidelines of Thursday’s European Council meeting.

The vaccination campaign and the question of mandatory jabs was one of the topics on the European leaders’ agenda.

“The most important thing is that everybody can and should get vaccinated,” Scholz also said on Wednesday. “We will win the fight against the virus, and we will overcome this crisis,” he added.