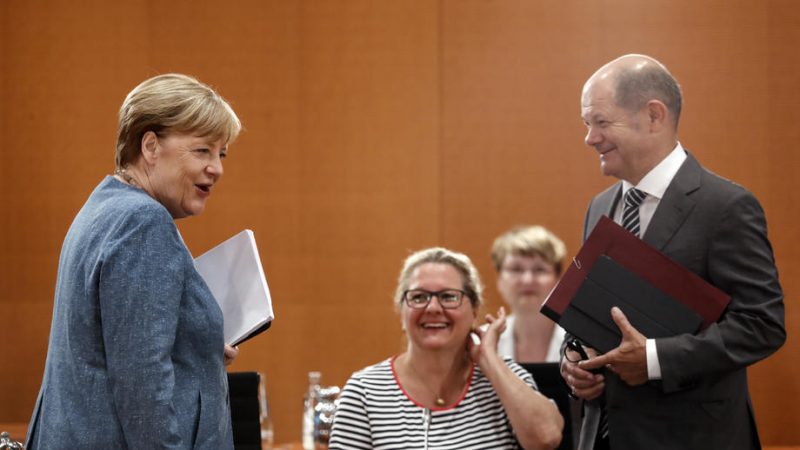 EURACTIV reported earlier on 5 May that Merkel and her CDU/CSU party were aiming to push through the necessary changes to the law before the end of the legislature period later this year. [EPA-EFE/FELIPE TRUEBA]

Scholz and Schulze said that the German governing coalition had reached an agreement to cut emissions by 65% by 2030 (up from an original target of 55%), to slash emissions by 88% by 2040 (currently no target), and to become climate neutral by 2045 (brought forward from 2050).

“It is important for the future of our country that we now get serious about the CO2 reduction targets, but also about the expansion of the infrastructure that is indispensable for this,” said Scholz.

EURACTIV reported earlier that Merkel’s government was aiming to push through the necessary changes to the law as demanded by the constitutional court before the end of the legislature period later this year.

Schulze, speaking at the Petersberger Climate Dialogue on 4 May, also said she hoped to amend the climate protection law within her term.

German Finance Minister Peter Altmaier said that he agreed with his colleagues from the SPD, Scholz and Schulze, on the ambitions regarding 2030 and the earlier date for climate neutrality of 2045. Altmaier notably failed to mention the 2040 goal presented by Scholz and Schulze.

The development comes as the Greens continue to top nationwide polls months ahead of September’s landmark election, after which Chancellor Angela Merkel will step down after 16 years in power.

The Green’s popularity, coupled with the court ruling on a complaint brought by German activists from Greta Thunberg’s Fridays for Future movement, has pushed climate policy into centre-stage in the campaign.