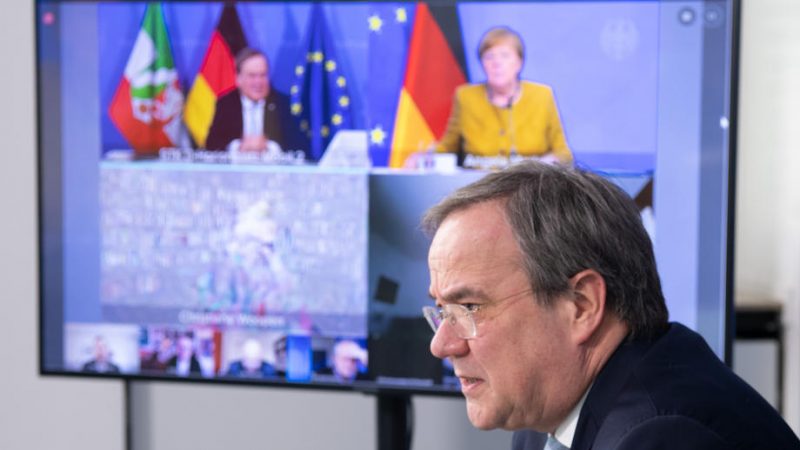 Armin Laschet, Minister President of North Rhine-Westphalia, sits in front of monitors in the State Chancellery to chair the meeting of the Corona Council of Experts, in Duesseldorf, Germany, 26 February 2021. Chancellor Angela Merkel was called into this round for the first time. [EPA-EFE/Federico Gambarini]

The Christian Democrats (CDU) are trying to limit the damage of the mask procurement scandal just ahead of two crucial state elections.

Two conservative German politicians are being investigated and have resigned from their respective parties, as part of a growing political scandal over business deals related to the procurement of face masks.

The two of them are said to have earned six-figure commissions each for brokering activities in protective mask businesses.

The scandal threatens to badly affect trust in the CDU ahead of two regional elections that will take place this weekend, also due to already existing problems around Germany’s comparatively slow vaccination programme.

The leadership of the CDU/CSU parliamentary group on Wednesday gave all its members until Friday evening to comment on possible financial benefits in connection with pandemic-related transactions.

However, this might not be enough to limit the damage to the party’s image, fears CDU General-Secretary Paul Ziemiak.

“The events have shaken our party, our members are just as angry as Armin Laschet and I,” Ziemiak told Rheinische Post, but was quick to stress that it was misconduct of individuals.

Recent polls have shown a general loss of confidence among voters as a result of the scandal, a Civey survey with three respective questions on behalf of the newspapers of the Funke Mediengruppe showed.

Only around a third of those questioned trust the Union as much as they did before the corruption allegations.

Around 60% state that the mask affair had a negative impact on their trust in the CDU and CSU and 75% of those surveyed expect that the parties will therefore be very likely to be damaged in the federal election.