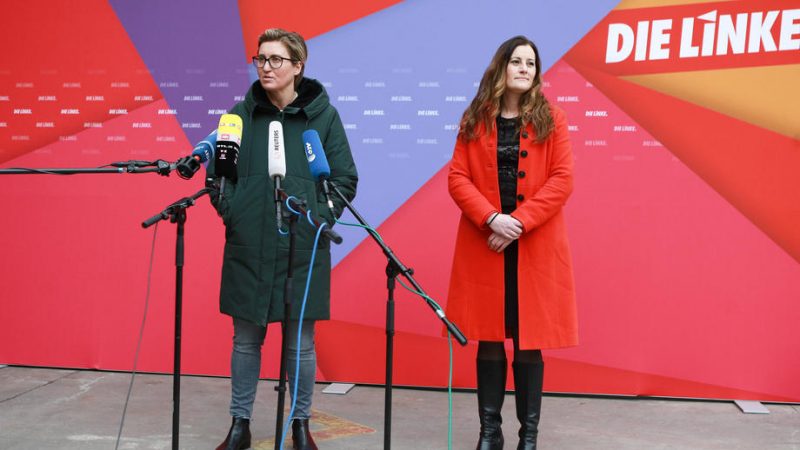 Hennig-Wellsow and Wissler represent different wings of the party.

Wissler has been a long-time state party leader in Hesse, where the party has remained in the opposition. However, while her wing of the party is sceptical about entering governing coalitions, Wissler avoided discussing such a possibility in her speech, instead, focusing on the party’s common themes like income inequality.

Hennig-Wellsow is from the party’s more pragmatic reformist wing. Her home state of Thuringia is the only state to be led by a member of Die Linke, Bodo Ramelow, and she has been a strong advocate for bringing the party into government. “Now the Thuringian way is also finding its way into federal politics,” said Hennig-Wellsow in her acceptance speech. “Let’s not wait any longer! People don’t have time to wait for us,” she added.

Given the CDU’s refusal to work with the party in a coalition, Die Linke’s only option to enter the government is with the Social Democrats (SPD) and the Greens in a so-called red-red-green coalition. The SPD and the Greens are similarly hoping for this arrangement, wanting to push the Conservative CDU/CSU Union into opposition.

However, it remains unclear whether a majority of the party is interested in such an option with the more sceptical wing saying that the Greens and SPD would have to move further to the left.

Political analysts believe that the stronger support for Wissler (who won by a larger majority than Hennig-Wellsow) is evidence that this majority does not exist.

They also point to MP Matthias Höhn’s failure to win the race for deputy chair. Höhn made waves in the party in mid-January when he published a position paper calling for a more hawkish stance towards Russia as well as support for Blue Helmet missions, likely necessary conditions to enter a coalition with the SPD and the Greens. (Sarah Lawton | EURACTIV.de)